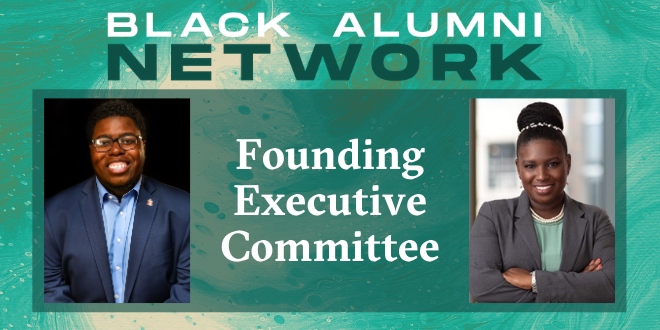 The group works to create networking opportunities for Black alumni, make philanthropic investments in the University, and provide mentorship to current students.

As they work toward their official launch, the Black Alumni Network planning committee has held interest meetings, chosen a philanthropic cause, planned the Network’s engagement activities for the upcoming year, and are now ready to announce their newly-elected founding committee members.

“I’m really proud of the work we’ve done in this first year,” said founding member and newly elected Chair, Jerail Fennel ’16. “I take my hat off to Chelsea [Shackelford] with the alumni office for all the hard work that she has put in. It’s like seeing a two-year long vision finally coming to fruition. I’m excited that we have a great group on the Executive Committee who wants to do the good work. Although COVID came and kind of turned some things upside down, we still are looking forward to seeing everyone virtually during Homecoming, and just seeing how far and how wide this alumni network can spread.”

“It’s very exciting to be a part of something literally since the beginning,” said Chelsea Shackelford, Assistant Director of Alumni Engagement. “I met with Jerail in my first few months on the job in early 2019 and we’ve worked diligently to get to where we are today. We have recruited alumni who are truly passionate about Jacksonville University.”

The individuals elected to serve on the very first Black Alumni Network Executive Committee are:

Jerail Fennell graduated from Jacksonville University in 2016 with a bachelor’s degree in communications, becoming the third member of his family to graduate from the University. During his two years at JU, Jerail became very involved with student-led organizations. He served as the Station Manager for Dolphin Radio, Director of Public Affairs for JUSA, President/Founder of the Distinguished Black Gentlemen, and worked as a Resident Assistant for the Department of Residence Life. Jerail was also an active member of TRIO and became a member of Kappa Alpha Psi Fraternity, Incorporated while at JU. Jerail is the 2016 recipient of the Dolphin Award, awarded to two students for excellence in student involvement, as well as the 2015 and 2016 recipient of the communications department’s Excellence in Student Media Award for his involvement in revamping Dolphin Radio.

Following graduation, Jerail begin to work in the marketing/communications field in the Jacksonville area. He volunteers with The Women’s Center of Jacksonville, Brooks Rehabilitation, and Fresh Ministries. In 2019, Jerail married Veronica, a fellow Class of 2016 alumnus. Today, Jerail is the Manager of Marketing & Communications for Duval County Public Schools. He spends his free time writing, taking pictures, and performing standup comedy.

Shannon N. Proctor grew up in Jacksonville, Florida, attended the local public schools, and was an active member of the Jacksonville community. Staying close to her hometown, she attended Jacksonville University on the President’s Scholarship, Bright Future’s Scholarship, and the Sproull Scholarship. While at JU, Ms. Proctor was a member of the Navigator, JU’s student newspaper, and the Commuter Council. She completed her senior research in cell biology with Dr. Karen Jackson and participated in a year-long internship at the St. Johns River Water Management District as a regulatory scientist. Ms. Proctor graduated from JU in 2008 with a Bachelor of Science in Chemistry, with a specialization in Biochemistry and minor in Biology.

Ms. Proctor is now a pharmaceutical products and complex litigation attorney at Hollingsworth LLP located in Washington, D.C.  Before joining Hollingsworth, she worked at a law firm in its global FDA practice, advising clients on various FDA regulatory matters. Proctor also clerked at the Court of Federal Claims (OSM) and U.S. District Court for the District of Columbia. In her free time, Ms. Proctor enjoys cooking, hiking, reading, competing in her bowling league, and watching sports (especially cheering for the Jacksonville Jaguars).

Veronica is a Jacksonville native and a graduate from Andrew Jackson High School, the oldest high school in Duval County. She continued her education at Jacksonville University where she received her Bachelor of Arts in Communications. As a student, Veronica founded the Distinguished Black Women of JU and served as the Program Director for Dolphin Radio.

Following graduation Veronica found her passion for making change in her hometown working in the nonprofit sector. In 2020, she graduated with her Master of Science in Human Service Administration and was inducted into Pi Gamma Mu, the International Honor Society of Social Sciences. Mrs. Fennell now works at JPEF as their Manager of Operations and Development.

Fennell is a member of several community organizations, including the Atlantic Circle, Junior League and the Association of Fundraising Professionals. She has served on the board of directors for the Association of Fundraising Professionals as the Digital Communications Coordinator. Her goal as the founding Philanthropy Coordinator for the Black Alumni Network is to raise funds for the Black Alumni Network Scholarship Fund. Veronica and her Dolphin Sweetheart, Jerail, love to travel and take photos in their spare time.

Julius Richardson served in the United States Marine Corps for 13 years, specializing in Supply Chain and Logistics. His career assignments were Camp Lejeune, NC; Jacksonville, FL; Hot Springs, AR; and Beaufort, SC; in addition to several overseas deployments. Richardson also completed a successful tour of duty as a Canvassing Recruiter, enlisting 42 Marines. That tour of duty helped him realize that he enjoyed marketing, sales, and helping people. After an Honorable Service, Julius decided to pursue another challenge: obtaining a college degree. Returning to Jacksonville, FL, Julius completed a bachelor’s degree in business management and marketing at Jacksonville University.

Upon graduation, Richardson continued his career in recruiting with TEKsystems, an Information Technology services and staffing company. During his tenure there he was able to successfully place IT professionals from contract to permanent opportunities with Fortune 500 companies such Bank of America, CSX, and Blue Cross Blue Shield. From there, he went on to become the Human Resources Recruiter with the Jacksonville Transportation Authority (JTA), all the while earning his Master of Science in Organizational Leadership at JU. Currently, as the talent acquisition business partner with Crowley, Richardson continues his passion for helping others as he aligns qualified candidates with professional opportunities.

Sequoyah Glenn graduated from Jacksonville University in 2013 with a dual bachelor’s degree in marketing and management. As a student she was an active member of the Black Student Union, the Jacksonville University Gospel Choir, Brumos Circle of Excellence, TRIO, and is a proud member of Alpha Kappa Alpha Sorority, Inc. She then went on to obtain her Masters of Business Administration in Marketing at Brenau University. She has remained connected with her alma mater through hosting Atlanta Dolphin Club events, mentoring current students and has returned to campus to speak to students about life after graduation.

Marrying marketing and tech, Glenn has created her own lane within the space of advertising research by activating her passion of being as analytical as she is creative. Sequoyah’s budding career spans across various media groups and finally landed her at an ad agency as the first and only research analyst in their 12-year history. Her strategy and insights have led to the successful campaigns of some of the biggest brands known across the US, as well as brands we hold close to our hearts within local communities throughout the Southeast.

Tiffany Dumant’s passion for coordinating and planning events started at Jacksonville University after joining Dolphin Productions in the fall of 2007. She was unaware at the time, but joining Dolphin Productions would change her career path. Though coordinating events involves long hours and hard work, she reaps the rewards when she sees the excitement on the faces of people she brought together for a shared experience.

Dumant is the Director of Conference and Event Services at Barry University. As director Tiffany manages a one-stop shop operation that provides the most effective planning environment to successfully execute a conference or event. She collaborates with Schools and departments to streamline events, enhance the experience, reduce overall expenses and increase revenue for the University. Outside of the office, Tiffany enjoys traveling, spending time with family and friends, exploring local gems in her hometown of Miami, FL, and song writing.

Darion Diasgranados is a certified Travel Agent for a corporate travel agency, as well as host and producer of the Truth or Darion Show on social media. Darion grew up in Waldorf, MD and ventured out of state to attend Jacksonville University’s music business program on a partial talent scholarship. During his time at JU, he was hired on the University Campus Activity Board, Dolphin Productions, as the Music Coordinator. He was responsible for bringing musical events to campus to help bond students outside of their normal on-campus routine. Diasgranados was nominated and elected as President of Black Student Union for the 2010-2011 term. In this role he created events for Black students and was able to continue the annual Black History Month program. Through BSU, Darion managed members into separate teams to create and perform as the BSU Gospel Choir and BSU Dance Team.

Darion graduated from Jacksonville in 2011 with a Bachelor of Science in Music Business, concentrating in marketing. Soon after, he was hired as a Promotions Assistant at CBS Radio in Washington, D.C. Among his many duties there, he found a love for hosting and co-hosted a livestream show which was the most viewed show on the platform. In 2012, he was introduced to the travel industry with Virgin America Airlines. He was able to travel for leisure visiting fellow JU alumni and planning meetups. In 2015, he moved to Dallas, TX and worked for iHeartMedia, which allowed him to work backstage at Jingle Ball, a city-wide mega-music concert. Diasgranados remains in Dallas, where he plans to create a platform for podcasters to express their opinions.

Get PHIN-volved with the Black Alumni Network

Mingle with the Jacksonville University Black Alumni Network (JUBAN) Executive Committee and learn about their goals for the first year of the Network’s establishment during #JUStayAtHomecoming & Family Week! JUBAN will hold their first official event virtually on Thursday, October 8 from 7:30-9 p.m. via Zoom.