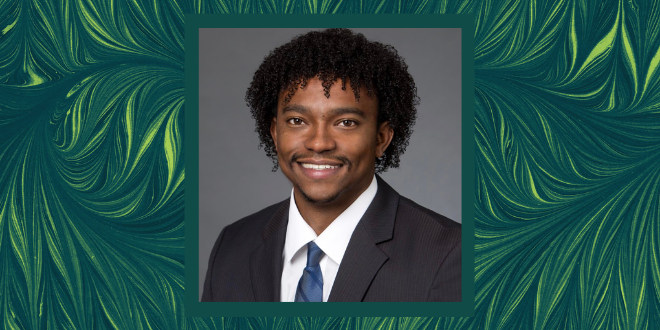 Within the four colleges and three institutes of Jacksonville University are tomorrow’s leaders, students who hope to better their communities and perhaps change the world around them. Alumnus Javon Knight was one of these students. Knight received his Master in Public Policy degree from the College of Arts and Sciences in 2020 and shortly thereafter was welcomed into the American Enterprise Institute’s Leadership Network Millennial Cohort. The cohort is designed for young professionals between the ages of 25-30 who share the common interest of bettering the human condition through public policy. According to Knight, the cohort has been an experience that continues to shape him as a young professional.

“The opportunity to engage with diverse individuals in the policy sector has been an eye-opening experience. It’s allowed me to broaden my thinking and learn from policy experts with different political ideologies than my own,” Knight said.

Knight arrived at JU with an interest in serving the community that started when he was much younger and noticed that many of the people who looked like him experienced increasing levels of socio-economic hardship. As he got older, he gained a passion for local government and turned to the dedicated faculty of JU to help him explore socioeconomic issues while making a difference in the process. In 2020, he completed a capstone project about Jacksonville’s homeless population. When asked how he chose his topic, he had this to say:

“The prevalence of homelessness in Jacksonville has always been at the forefront in my mind. It’s an issue that I’ve engaged with in other ways and one that I truly believe we can resolve, so the decision was easy.”

One of Knight’s foundational beliefs is that relationships are just as important as education, and while at JU, he formed relationships with faculty who were committed to his personal and professional growth. Dr. Rody Borg and Mr. Richard Mullaney were two of the many faculty members who experienced Knight’s economic expertise and heart for change.

Borg, a professor of economics and public policy, first met Knight when he applied to the MPP program. “Javon cares about the world around him and the people in it, especially people who may be invisible to our society. He’s smart, well-spoken and very willing to help others,” Borg said.

Richard Mullaney, director of JU’s Public Policy Institute, served on the board that selected Knight to be a minority fellow. The purpose of the MPP Minority Fellowship and Scholarship Fund is to educate, train and prepare a new generation of African American leadership in north Florida. The fellowship offers a full tuition scholarship and stipend, and guarantees an internship with the city of Jacksonville.

“I was present when he was interviewed and selected for a scholarship, and later on he became one of my students,” Mullaney said. “He’s diligent and handles himself with maturity and poise. We’re very optimistic about the things he’s going to do in the future.”

Knight’s academic excellence has opened many doors, including career-enhancing opportunities in the mayor’s office, the Jacksonville Transportation Authority, and several other organizations. The JU Alum has been sweeping through the Jacksonville community and continues to broaden his connections. When asked the common “What’s next?” question, Knight had this to say:

“I’d like to be in a position where I can help improve my community, or whatever community I end up in.”