Home » All Sections » MARKET LIFE: Why the U.S. Deficit Matters 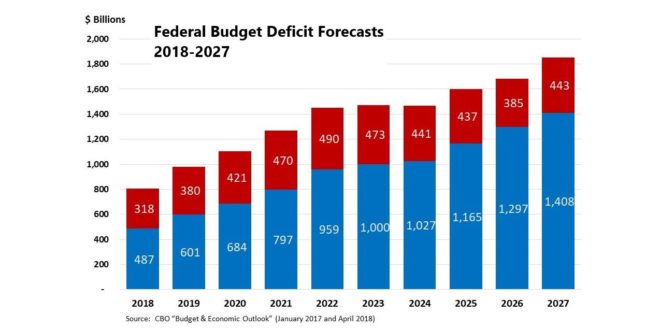 Does the federal deficit still matter?

The deficit mushroomed in the last 16 years as a result of increased government spending and tax cuts. The projected U.S. federal budget deficit for fiscal year 2019 is $985 billion. That figure covers October 1, 2018, through September 30, 2019. This occurs when U.S. government spending of $4.407 trillion exceeds its revenue of $3.422 trillion. The U.S. deficit is now 18 percent greater than last year.

Economist Paul Krugman shocked the business and policy world in 2017 when he said “deficits matter again” in the New York Times. Krugman reversed his claim that deficits were good for the economy in 2008, largely because the U.S. was at or above full employment in 2017.

You might wonder why government spending exceeds tax receipts or other revenue sources. Many politicians and economists argue that large deficits cause no harm to our national economy or private businesses. They assert that federal government borrowing practices do not drive interest rates up or down. Krugman claims the “borrowing” is supported or accommodated by federal policy, so the imbalance doesn’t disrupt the interest rates targeted.

What if local municipalities or states operated as if deficits did not matter? Does that policy make sense? Every state, every year, attempts to balance their budgets and few governors would argue that a state deficit doesn’t matter. Why then do some economists and politicians believe it doesn’t matter at the national level? There is substantial evidence that the U.S. economy, and especially private businesses, would grow stronger and find affordable capital if the U.S. did not run up large deficits.

Along with my colleagues Dr. Rich Cebula and Dr. Fabrizio Rossi, I completed research on this very topic: Impact of Federal Budget Deficits on Long-term Corporate Bonds. Our findings were published in the Journal of Financial Economic Policy. Our research provided evidence that high federal budgets crowd out or increase the interest expense for private companies that borrow or use money raised by bond issuance. Emerald Publishing recognized that collaborative work in 2018 with a Literati Award.

The summary findings conclude that bond proceeds are critical to a growing economy. That capital is utilized by both public and private companies to hire new employees, purchase capital equipment, or buy synergistic or competitive companies that provide new revenue opportunities and spur economic growth outside of issuance of new equities. When the interest expense from bond issuance increases, a private company may decide against taking greater financial risk by issuing new bonds.

Our research showed an impact that higher deficits increased the Moody’s Baa-rated long-term corporate bonds from 1960 to 2015. Because the federal deficit crowded out less desirable borrowers, it increased the risk of those Baa borrowers not being able to pay the higher interest expense or not going through with the bond issuance. High interest expense, no doubt, weighed heavily on their minds.

This outcome is similar to the residential real estate market. When mortgage rates raise one to two percent, many of us hesitate to purchase a more expensive home. We worry about paying the incremental $500 to $1000 to satisfy a higher monthly mortgage payment.

A principal finding is that the ex ante real interest rate yield on Moody’s Baa rated corporate bonds is an increasing function of the federal budget deficit, expressed as a percent of GDP. In particular, if the federal budget deficit were to rise by one percentage point, say from three to four percent of GDP, the ex ante real interest rate would rise by 58 basis points.

The greater the U.S. federal budget deficit, the greater the real cost of funds to firms; especially when seeking capital from bond issuance. Hence, the high budget deficits of recent years led to crowding out investment in new plants, new equipment, and new technology because interest expense increased in concert with deficit spending. According to our study, all of this impacts economic growth and restricts prosperity.

Federal budget deficits should be substantially reduced in order to protect the long-term prosperity and stability of the U.S. economy.

The social implications of reduced job growth and GDP growth compromise the health of the overall economy because deficits are accepted as a “necessary evil” or inconsequential to the cost of capital. Our study is original in that it focused on the impact of the federal budget deficit on the ex-ante real long term cost of funds to firms over five decades.

Nearly all past deficit studies failed to consider the long term implications. In theory, the ex ante real yield on Moody’s Baa rated long term corporate bonds should be seen as a key bellwether for gauging risk appetite for incremental corporate investments. These empirical findings have potentially significant implications for U.S. firms and for the overall economy.

Now, what do you think? Do high federal deficits impact prosperity and job growth, now or in the future?