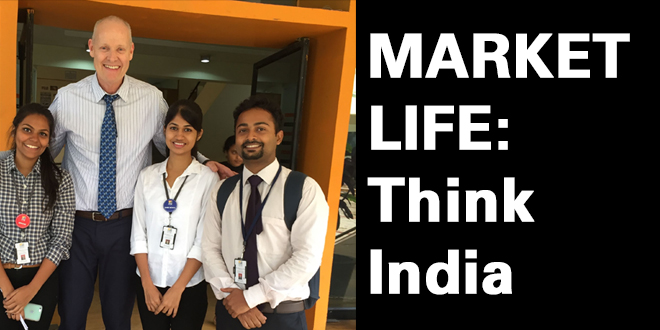 Before my first trip to India in 2017, I wondered how to best approach this market. What were the advantages in terms of developing business there?

Predictions set India to be the largest nation in the world by 2050. Maybe you’ve contemplated how to get involved with India, or better yet, how to better understand their unique and fascinating culture. Like me, you may have put off further exploration of trade with your Indian counterparts. You may think India possesses too small a middle class. Or you fear the average consumer there cannot afford your product or service. Maybe you think Indian culture is difficult to understand or navigate.

Here are a few facts that might change your mind and get you motivated to “think India.”

They have the people.

With the possible exception of  China or Brazil, India is the most attractive developing country in the world. It’s the seventh-largest country in the world by area and it’s also second-most populous with 1.3 billion people. The Indian workforce has proven highly industrious, educated, and fluent in English. Yet the nation is currently experiencing its highest unemployment rate in 45 years. Despite those rates, the Indian economy grew at an impressive 8.2 percent in the first quarter of 2018-19, according to The Economic Times. India is poised to become a talent mecca.

India is the most populous democracy in the world. More importantly, it’s among the most stable, too. The nation celebrated Indian Republic Day just last month. Unlike China, India allows open communication and censors much less often. They value a free press and are fighting against any reputation of corruption. Google, Facebook, Instagram, and other social platforms are freely utilized. Other countries in the region place heavy restrictions on these applications and don’t allow free speech.

India is aggressively seeking international partners from the west. Unlike many nations, India embraces diversity and has adapted to new international norms with poise and optimism. While the economy has welcomed international companies to invest directly since liberalization in the 1990s, infrastructure investment from abroad remains slow. But the good news is that Narendra Modi, India’s Prime Minister since 2014, is both progressive and well respected on the world stage and specifically in the U.S. Modi’s practical pro-business policies make India a serious contender for a country poised to economically explode in the next 10-15 years.

Indian people, in general, place a very high value on education. Policymakers are proactive about adopting a more global approach to educating its millions of young people. While India’s rural populations implement advanced agricultural practices, light manufacturing, and unique handicrafts, their urban counterparts work hard to attract industry and professional services in growing metropolises such as Hyderabad and Bangalore. Both these cities are home to thriving high tech companies. As a result of economic reform, a growing middle class, and more quality education, India and its people are recognizing the value of investing in graduate education in the UK and United States.

India stands to attract more global partners and investments for access to their deep pool of human resources and creativity. Owing to the presence of a vast range of diversity in India, strong collaborative partners are attracting new foreign investments. The nation boasts a supportive, pro-business national government, too.

Remember, India is massive. Period. And a younger population is their single greatest asset—a reality that will drive the domestic market upwards. Future shortages in skilled and educated workers will make India the world’s largest producer of human talent. The next decade is likely to usher in an era of substantial domestic growth for India and a huge increase in its influence over the developed world.