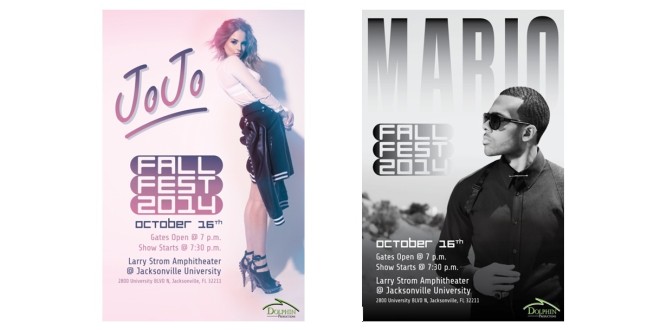 It’s Mario & JoJo, headlining a much-anticipated free Fall Fest concert for the JU community at 7:30 p.m. this Thursday, Oct. 16, at the Larry Strom Amphitheater on Dolphin Green. Co-headlining the energetic performance will be Young Trajik. Mario, a Baltimore native, is best known for his singles “Just a Friend 2002,” which reached No. 1 on the charts when he was only 15; and “Let Me Love You” (2004), which reached No. 1  on the Billboard Hot 100 and won him two Billboard awards. He has appeared in the movies Step Up and Freedom Writers and released a single with Nicki Minaj titled “Somebody Else” in 2013.

Joanna Levesque, better known by her stage name JoJo, was raised in Foxborough, Mass. In 2004, at 13, she released her first single titled “Leave (Get Out),” making her the youngest solo artist to have a single reach No. 1  on the Billboard Pop songs chart in the United States. Her second major single, “Too Little Too Late,” was released two years later, reaching No. 3 on the Billboard Hot 100, and earned the singer her first platinum-selling single.

She was also seen in major movies such as Aquamarine, G.B.F. and RV, the latter with the late Robin Williams. Her newest musical endeavor was an EP titled “#LoveJo” which was released on February of this year.

2Deep Entertainment and Jacksonville University have partnered to put together the event. For more information, click here.