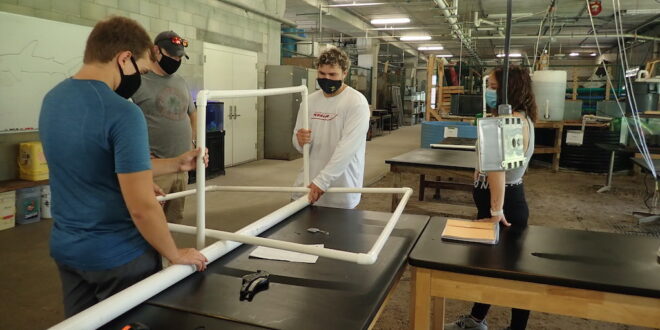 The phrase “one man’s trash is another man’s treasure” is being put to the test by students in Jacksonville, and scientists are reaping the benefits.

Jacksonville University Professor Jeremy Stalker created an inexpensive and effective method for studying ocean currents and he’s using it to engage students in a virtual learning environment. Using everyday household items and recycled materials, students work in teams to build GPS-tracked buoys, or “drifters,” in hopes of discovering new information about the ocean.

“We got the idea on a study abroad course in the Bahamas,” says Professor Stalker who teaches in the Marine Science Research Institute and researches ocean currents. Stalker found inspiration in trash and discarded material that had washed up on a sandy beach. “There were so many reusable pieces. We decided to engineer drifters out of the parts we found on the beach.”

Stalker, in partnership with Crowley Maritime, launched the project in 2013 with students at JU. This summer, as part of the MSRI’s Virtual Summer Camp for high school students, Stalker decided to challenge students to build their own drifters with material they have at home. It turned out to be one of the most popular sessions of the virtual camp.

The process of making these drifter buoys is challenging but fun for students, who must tap into their creativity and resourcefulness. First, they study designs of some of the more high-tech drifters used by ocean researchers. Then, they begin designing their own, carefully considering the best materials to achieve optimal buoyancy, strength, and durability. Their homemade buoys must keep the GPS tracking unit 3 feet above water to ensure it will maintain a strong satellite connection.

Before loading their drifters onto a Crowley ship to be launched in the open ocean, the students test their drifters to see if further adjustments are needed. Of course, with every experiment there are successes and failures.

“We had a number of drifters beach on the coast,” said Stalker. “The wind can push them into the surf zone and then they are doomed. Successes? We have had a couple of drifters afloat for months that give us some really cool visual tracks of the dynamics of the gulf stream.”

Those that do succeed can travel thousands of miles, reporting back important scientific information that helps scientists like Stalker understand how ocean currents may be changing in response to a warmer climate. One drifter built by students this summer traveled about 1,800 miles, which is about the same as driving from Jacksonville to New York and back.

“The drifters are used to calculate the velocity of these currents,” according to Stalker. “We have been seeing a slowdown in current velocity the last 30 years, our drifters move slower and our poles must be warm. That warming, and our drifter’s decreased velocity is a direct effect of global warming.”

The ocean drifter project was featured on an episode of Jacksonville University’s The Science Of.

Making these drifters is more than just a fun project for the students. It offers them an opportunity to use their critical thinking skills and practice working in teams, and it expands their perspectives.

“I want them to feel an attachment and connection to the big physical motions in the world and ocean,” says Stalker. “These drifters become extensions of their imagination and science that can reach thousands of miles out into the ocean and make it real.”