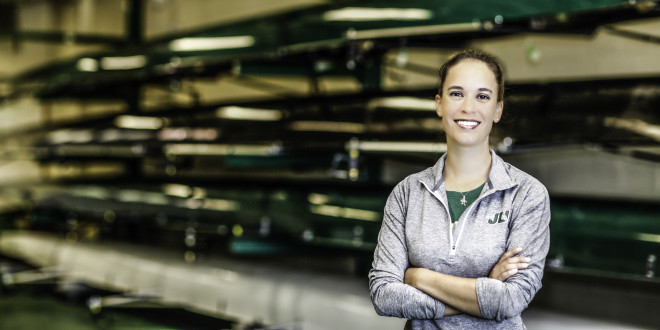 In August, Jacksonville University made headlines when it named Marci Robles its new Men’s Rowing head coach. Robles comes to JU having spent the previous five years in Gonzaga and Georgetown.

“Marci Robles is a superstar among her peers,” said Dr. Donnie Horner, the University’s Chief Athletics Officer. “Her experience with big rowing programs at nationally competitive but smaller D-1 schools is a perfect fit for JU. While her academic and coaching credentials speak for themselves, Marci is a leader of character who knows how to properly build high performance teams. She is a perfect fit for JU and the men’s rowing program.”

“I’d like to thank Dr. Horner and Director of Rowing Jim Mitchell for this incredible opportunity,” said Robles, who becomes the first female head coach of an NCAA Division I men’s rowing team. “I’m so honored and excited to be joining the JU family. Jacksonville University rowing has a rich and storied history, and I look forward to not only building upon the success that the team has had over the last few years but also working with a very talented group of student-athletes to take this program to the next level.”

“Coach Robles brings tremendous experience from excellent programs to our team,” added Mitchell. “Her passion for the sport, strong leadership skills, and drive to excel will help our men’s program continue on the path to excellence. I am excited for our student-athletes and the leadership they will receive. Marci knows how to develop speed, and our guys will enjoy the experience.”

Prior to Georgetown, she spent time at National Cathedral School in Washington, D.C., as the freshman coach.
Robles was a four-year coxswain on the men’s rowing team at Boston College. She coxed the men’s lightweight 4+ to a first place finish at the Knecht Cup in 2006 and a fourth place finish in the lightweight 4+ at the Dad Vail Regatta, also in 2006.

Robles, who went on to become a member of the Thompson’s Boat Center from 2006-07 as well as Riverside Boat Club from 2008-09, is a U.S. Rowing Level I certified coach.