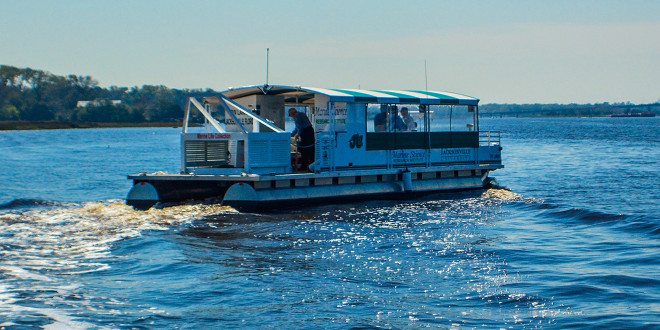 With a view to a future emphasizing JU’s waterfront, University officials and donors have teamed to bring more than $500,000 worth of marine research, sailing and rowing vessels, and docks on the St. Johns River.

The Marine Science Research Institute’s new state-of-the-art floating classroom, the Gentry Family Floating Docks and JU’s new sailing fleet and rowing shells were shown off during Spring semester to an appreciative crowd at the Negaard Rowing Center, with a blessing of the fleet and tours bookending the festivities.

The 48-foot-by-12-foot floating classroom and a new companion dock will allow students and faculty to conduct more engaging and immediate marine research, classes and study. The Coast Guard-certified pontoon vessel is equipped with student-oriented design, lab stations, electrical power and can accommodate classes of up to 28 people.

The 12 new Z420 sailboats christened are newly designed specifically for college sailing, and JU has one of the first fleets. More than 200 donors raised nearly $100,000 to help fund the sailing team and purchase this fleet.

In addition, two new eight-person rowing shells, dedicated last November, were on display. They were christened “Cookie Petrakis” and “John Petrakis” in honor of the couple’s generous contributions and support of the rowing program. John Petrakis is an alumnus. In total, JU now has 17 shells, plus an additional six used as part of the Brooks Rehabilitation Adaptive Sports and Recreation Program.