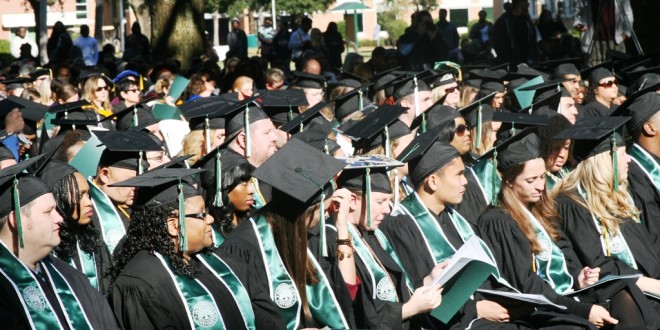 That was some of the main advice keynote speaker Gary R. Chartrand offered Saturday, Dec. 13, as Jacksonville University bestowed degrees on nearly 400 graduates, one of its largest Fall Commencement classes ever (see two Facebook galleries of photos at http://ow.ly/FQjPa and http://ow.ly/FVv0z).

“There will be so many variables in your life’s journey that will be out of your control. Not so with your attitude. You own it all by yourself,” said Chartrand, Executive Chairman of Jacksonville-based Acosta Sales & Marketing and Chairman of the Florida State Board of Education.

One way to maintain a great attitude: Stay away from naysayers at all costs.

“If you want to become better at what you do, reach your full potential and achieve success, avoid negative people … a pessimist is a person who feels bad when he feels good, for fear that he is going to feel worse when he feels better,” said Chartrand, who was awarded an Honorary Doctorate in Leadership Excellence. 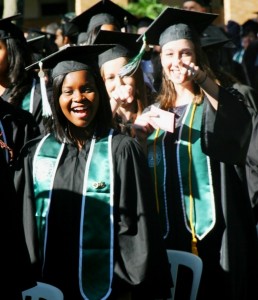 “You see, most people have it backward. They think, ‘If I achieve something, then I will feel important; I will be worthwhile.’ No. You should be thinking, ‘I’m important, I’m worthwhile, I have special gifts and talents that make me unique and different from anybody else on the planet. Now, watch me achieve.’ ”

His spirited keynote capped a beautiful, sunny morning on Dolphin Plaza in which the University awarded 80 master’s degrees, including 38 MBAs and 34 MSNs. The most degrees among the 319 bachelor’s degrees awarded were in Nursing, at 219, followed by Bachelor of Science, 56, and Bachelor of Business Administration, 29. Graduates hailed from 32 states and six foreign countries. The most popular majors were Nursing, followed by Graduate Business (MBA) and Management.

Fifty-three bachelor students graduated with Latin honors, which are awarded to students who earn a minimum GPA of 3.50 with 60 graded credits at JU.

The Fred B. Noble award for outstanding scholarship was given to Zachary Thomas Wing of Jacksonville, an Ed White High School graduate who earned his bachelor’s degree in music business from the JU College of Fine Arts Saturday. The award, given to the graduating senior with the highest grade point average, is named for the late Fred B. Noble, who earned a JU bachelor’s degree at age 91 and was a founder of the University. This year’s winner maintained a 3.95 grade point average.

“For all of us, it’s gratifying to experience the performance of our students continuing its upward trajectory,” Cost told attendees. “It is a great time to be a Jacksonville University Dolphin.”

Chartrand, 60, has been the pivotal force transforming Acosta into a national Sales & Marketing company, and it now employs more than 38,000 associates in 100 offices in the U.S., Canada and select markets around the world. In April 2007, he led a community effort that resulted in Jacksonville becoming only the second city in Florida to have attracted the Teach for America program. Because of his passion for education, Florida Gov. Rick Scott appointed him to the State Board of Education in 2011, and he is currently its chairman.

On Saturday, he praised the JU graduates for their hard work and achievements, and counseled them not to assume any future success will come easy. 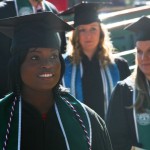 Chartrand also told the students to maximize their potential by appreciating their uniqueness – not by rating themselves against others. 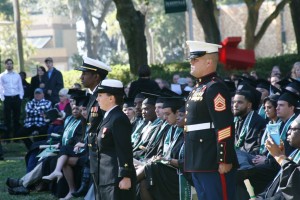 “Your success will come from being different than, not from being better than, others,” he said.“From the beginning of mankind to the end of mankind, there will only be one you. There is great power in this if you think deeply about it.”