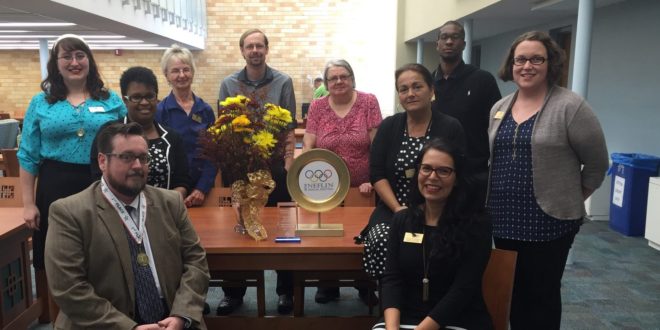 The Northeast Florida Library Information Network (NEFLIN) confirmed what we already knew – the staff at the Carl S. Swisher Library is among the best around.

At the recent annual meeting in Orange Park, the JU staff and one individual earned prestigious awards in competition against other libraries in the network which stretches from Brevard County in the south to Madison County (24 counties total) to the west of Jacksonville.

The staff as a whole earned the Making the Most of NEFLIN Continuing Education award for participating in the most educational opportunities offered by NEFLIN, a network of about 550 libraries (2,720 staffers) serving about four million people.

“Our Continuing Education includes webinars, training sessions and user groups,’’ Director of the Library Jessica Collogan said. “We are very proud to have been recognized.’’

While the staff was honored for its efforts, Digital Services Librarian Raymond Neal earned the gold medal in the 2016 Librarian Olympics. He took part in several rounds of early competition, which included timed trivia contests and a photo scavenger hunt before the annual meeting even began.

At the meeting there were more contests that narrowed the field to the final three who competed in a library Jeopardy game.

“I had some hopes because I’m pretty good at trivia,’’ Neal said. “I didn’t know there was going to be a scavenger hunt or the next two eliminations but as long as it’s trivia I’m on pretty solid ground.’’

Neal had the lead going to the final Jeopardy category of Presidential Libraries.

“The final category was pretty iffy,’’ he said. “That’s not something I felt especially confident or fearful about it was kind of there. I went to the coward’s strategy and didn’t bet anything.’’

The answer was: “This state has the most Presidential Libraries in the United States.’’

He guessed California and was wrong, but his opponents missed also giving Neal the gold medal.

“Through the war of attrition, I won,’’ he said.

The correct question? What is Texas?