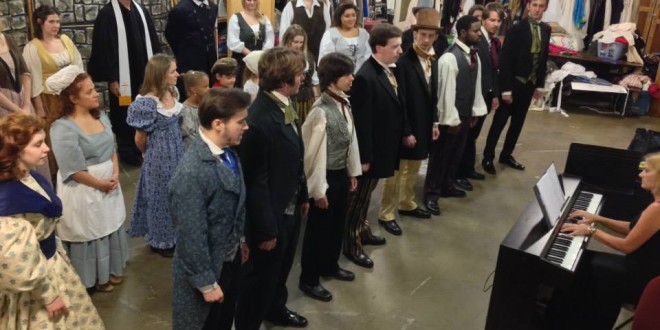 Jacksonville University Fine Arts students, alums and faculty are thrilling audiences in a three-week run of “Les Misérables” at Theatre Jacksonville, one of the first community theaters to ever receive rights for the blockbuster musical.

Award-winning JU Voice Prof. Kimberly Beasley is on board as Music Director, with another eight JU notables taking the stage, providing music or doing stage direction for the performances, which began June 6 and run through June 22. 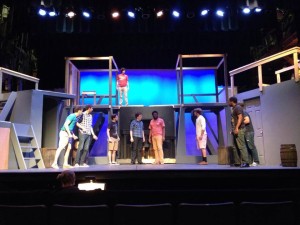 “We have been rehearsing since February, and our JU students are fabulous in this show,” Beasley said. “Many of them are local and have been doing community theater since high school, but they are outstanding in their roles and representation of JU in this production.”

Beasley said community involvement is crucial for students and faculty, both for purposes of growth and for maintaining the reputation that JU Voice has in the community.

“Every time I represent JU in the community and there is collaboration with directors, singers and actors from the Jacksonville community, JU is being seen as an institution of excellence,” she said. “Our singers and musicians are excellent and have a great reputation in the community.”

The show, set in 19th-century France, follows convict Jean Valjean as he is hunted by the policeman Javert for breaking his parole. He must create a new life and honor his promise to raise the young orphaned Cosette.

EUJacksonville praise the production in a recent review, saying it had “never seen a stage with so many marvelous voices in a single cast at the same time.”

JU talent was singled out as well.

“The two men who lead the revolution and display their marvelously trained voices in the process are Alec Hadden as Enjolras and Chris Robertson as Marius. They raise the rafters when they sing ‘The Red and the Black,’ one of the most rousing songs in all of theatre,” the review states. “Two young ladies provide romantic interest. Cosette was portrayed by Haley Cox, Eponine by Katie Sacks. Both have lovely voices that work at an incredibly precise pitch.”

For her part, Beasley, with two decades’ worth of concert, stage, direction and teaching experience under her belt, said she learns something new every time she works on a show — both from the production itself and from the other musicians, directors and choreographers.

“Each show is unique, so there is always something to learn. And it is always fun to work with our JU students outside of JU — they realize that what we teach them in school is consistent with how we would handle any professional situation.”