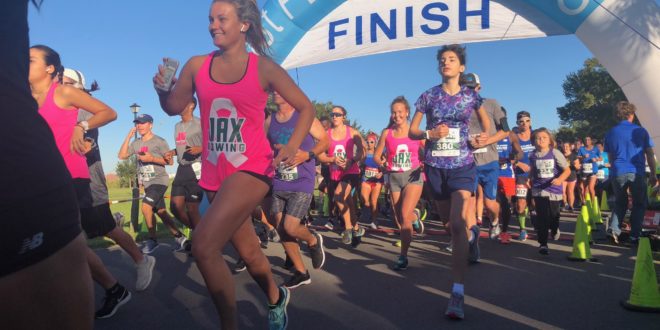 Sunday, August 19, the Jacksonville University (JU) community lost a talented and beloved young woman, just two days after giving birth to her third child. Stephanie Bloom served as far more than Assistant Director of Enrollment and Advising for the Graduate Nursing programs in the Brooks Rehabilitation College of Healthcare Sciences (BRCHS), Keigwin School of Nursing. She served as an example of the indelible impact of a purpose-filled life.

Described by colleagues as brilliant, innovative, stubborn, and more than anything, a champion for students. Stephanie made every moment count joining the JU staff in July 2010.

“She knew what I needed before I could ask,” said Dr. Cheryl Bergman, Interim Dean for BRCHS, about her time serving as the Keigwin School of Nursing Undergraduate Nursing Director. “It was uncanny. We were a team in every sense.”

Stephanie was hired to advise students enrolled in JU’s RN to BSN online program and later transitioned to Enrollment Coordinator for the Undergraduate Nursing program. In 2016, she returned to her one-on-one efforts with graduate students, allowing her the flexibility to support her growing family.

On the afternoon of August 25, Stephanie was laid to rest, leaving behind her husband John ’15 and their three children—Audrey age five, John Preston (“JP”) 18 months old, and their newborn son Benjamin. Stephanie was often referred to as “the backbone” of BRCHS. The depth of her loss was keenly felt and proved difficult to process.

A Passion for Action

Roughly two months after her tragic passing, the 2018 JU River House Run/Walk 5K was held in her honor. The run served both as a tribute to her passion for running and a celebration of her love for Jacksonville University and its students.

The event began with a moment of silence dedicated to Stephanie followed by a welcome from Jacksonville University President Tim Cost ’81. He expressed gratitude for the tireless efforts of those who organized the annual run and bid everyone a safe run.

Clinical Assistant Professor Michele McDonald, MSN, RN, said that day, “The tragedy of her passing hit our faculty especially hard. Stephanie was a wonder; her smile and laughter were infectious. These recent events—the diaper donation to the family, turning Stephanie’s office into a quiet place for breastfeeding mothers, and the River House Run—will never replace her, but it helps us come to terms with what has happened.”

Joanne Andrews, Stephanie’s Grandmother, was also present and spoke of feeling both overwhelmed and grateful for the University’s support. “Even the family members who aren’t here today wish they could be. Never could we have imagined all of this being done.”

To further honor her memory and her life’s work in nursing education, the Bloom family established The Stephanie Bloom Memorial Scholarship Fund. Through these gifts, students are directly supported with scholarships to pursue Nursing, a field that ranks No. 4 for the highest-demand employment in Florida. BRCHS aspires to be the region’s premier provider of health science education and a new generation of healthcare professionals, a mission that Stephanie upheld daily in the Keigwin School of Nursing.

A Passion for People

Her legacy continues in many ways, but most significantly in the lives of those she directly touched. Blair Lobacz, Graduate Clinical Coordinator at BRCHS, said Stephanie had a huge impact on her life, something nearly all her colleagues echo.

“I catch myself often saying ‘Stephanie taught me this’ or ‘this is what she would do.’ She was the glue in the Keigwin School of Nursing and offered a solution to every problem. Stephanie knew exactly what to say when you were having a bad day. We’d talk about what was going on in her life and what was happening in mine. We’d talk about vacations, Disney days, and the Florida Gators. I’ve run hundreds of miles with her,” said Lobacz. “The day Stephanie’s mother called me with the news that Stephanie had passed away was one of the hardest days I have ever lived. To say Stephanie was an amazing person is an understatement.”

Wanda Klima, also a Clinical Coordinator at BRCHS, said, “Every time I walked into her office, she would flash her big, beautiful smile. We made each other laugh, were usually in agreement on how to handle professional situations, and relied on one another to solve more difficult issues. She could work circles around everyone.”

“To say Stephanie was an amazing person is an understatement.”

She also praises the creation of The Bloom Room, a place for students who are new mothers to have a private place to breastfeed or pump while on campus. “She would always allow new mothers to use her office if they needed privacy.” Klima believes she would have been incredibly pleased by the gesture.

“Stephanie always put students first and truly understood that students are the reason we’re here,” said Clinical Assistant Professor Amber Santos, MSN, MBA, RN. “She always went the extra mile and was the nucleus of our Nursing program.” Santos attended the River House Run and said that it marked “the first time since she passed that a part of my heart was able to smile again.” Stephanie was loved by many and each effort to honor her memory, Santos said, is an important part of the healing process.

A Passion for the Future

Associate Professor and Director of Nursing Graduate Programs Hilary Morgan, Ph.D., CNM, also holds Stephanie in the highest regard, and says that she had a talent for seeing progressions, schedules, times, courses, faculty, and students all in her head, and could line them up in perfect order, like a Rubik’s cube. But for Morgan, her untimely death became a catalyst for a passion of her own. She would like to see Stephanie’s legacy include a greater awareness of maternal mortality and the tragedy that envelopes those left behind.

As a nurse midwife, Morgan has worked in obstetrics for more than 35 years and delivered over a thousand babies. “I can count on one hand the number of mothers lost at hospitals where I practiced. Stephanie did not fit the typical scenario of a maternal death. She was healthy, engaged, conscientious. Her death is unfathomable to me.” Morgan hopes states will take greater legislative action to investigate maternal deaths and seek solutions.

“I applied for the Family Practitioner Nursing Program this past spring. Initially, I was placed on the waiting list. As the start of the semester drew closer and closer, I reached out for some advice. I felt discouraged and decided to email Stephanie Bloom. She told me that I could call her […] about my application and about next steps. When Stephanie and I talked, she mentioned that she was one day away from maternity leave. I was so grateful for her taking the time to help me […] She talked with me like she had all the time in the world. Her advice gave me peace about my likelihood of getting into the program.

Fast forward to the next Monday. I received a call from Stephanie, informing me that another student had to forfeit their seat, and I was next on the list […] Despite being on maternity leave, she still reached out to me personally and made the whole process come full circle […] Since her passing, I have heard from many people about how Stephanie had helped them, encouraged them, and most importantly, believed in them. I hope that her legacy can be continued by this University.”

And continue it will. That afternoon, President Cost said to all gathered: “I thought it would be the appropriate place to show the appreciation and respect we have for Stephanie and the rest of the Bloom family, by announcing a document that I will sign later today. Thanks to Greg Nelson, who is here, the Market President for Merrill-Lynch Bank of America and a member of our Board of Trustees, and thanks to our Vice-Chairman Jamie Shelton who is here on behalf of our Board of Trustees, we present Mr. Bloom with three full-tuition scholarships to Jacksonville University for his children.”

Whether walking by her office, talking to the hundreds of students she mentored, or enjoying crispy chicken and whoopee pies (her favorites) at the Riverview Dining Hall, the Jacksonville University community will fondly remember the young woman who burned so bright and loved well.