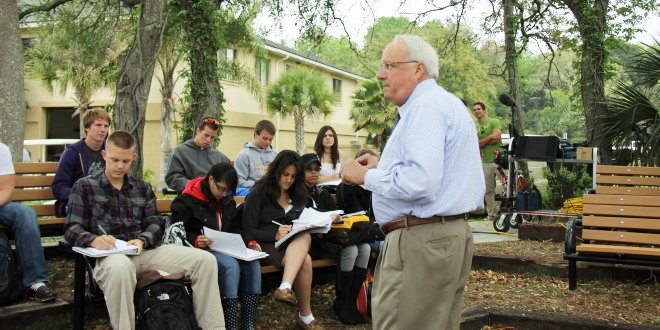 Professor A. Quinton White is a highly recognizable figure on the Jacksonville University campus. Professor, researcher, fundraiser and director of the Marine Science Research Institute.

What the University community might not know about him, however, is that he’s just as recognizable almost anywhere he goes in Northeast Florida. Conservationist, columnist, volunteer, expert resource to government agencies, schools and civic groups.

“He exemplifies the criteria for Leadership Jacksonville’s Tillie K. Fowler Distinguished Leadership Award: ethical leadership as a teacher and community leader; his awareness and understanding of complex community issues; his sharing and challenging perspective on water and environmental issues; his shared vision; and action taken for the greater good,” according to his nomination for the award.

The late Tillie Kidd Fowler, who died in 2005, was a member of the U.S. Congress following terms on the Jacksonville City Council, including time as Council president. She was a well-known community servant, who tenaciously advocated on behalf of the City of Jacksonville and the U.S. armed forces, particularly the U.S. Navy.

“By presenting Quint with this award, we are recognizing someone who really demonstrates leadership. He is a true community trustee,” says Leadership Jacksonville Chief Executive officer Jill Dame.

Among Dr. White’s more than 40-year-long contributions to both Jacksonville and the University are the founding of the St. Johns Riverkeeper advocacy group and serving as a manatee consultant to the City of Jacksonville Waterways Commission. He also writes the monthly “River Life” column in The Florida Times-Union, which focuses on the impact of the St. Johns on the quality of life in Northeastern Florida.

Dr. White, who is a Vietnam-era Army veteran, has also served as a board member or officer with Tree Hill, Planned Parenthood, the Jacksonville Community Council and The Museum of Science & History (MOSH).

His recent civic recognitions include the Christi P. Veleta Environmental Award from the City of Jacksonville’s Environmental Protection Board (2014), the Regional Leadership Award from the Northeast Florida Regional Council (2015); Marine Conservationist of the Year by the Florida Wildlife Federation (2015); and Business Journal Veteran of Influence (2017).

“Quint has served as a mentor to students, professionals and the community at large at the local, state and national levels,” his award nomination states. “Few people have had his impact on our environmental and ecological issues.”