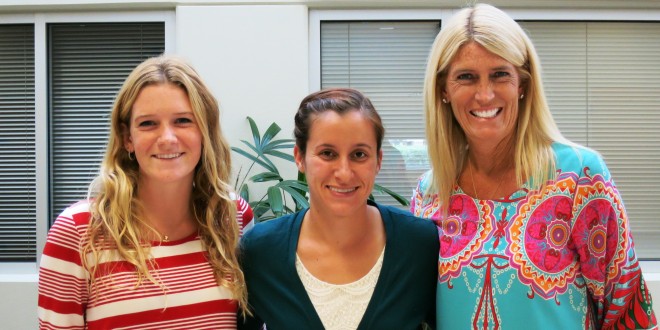 The latest recipient of the full-tuition Catherine “Catie” Carter Scholarship was welcomed into a special family recently, continuing a tradition that honors the memory of its teenage namesake by providing funding to help awardees complete or advance their Nursing education in the Brooks Rehabilitation College of Healthcare Sciences.

Mary Sturgis, 20, of St. Augustine, was celebrated at a luncheon at the college, and is studying to complete her Bachelor of Science in Nursing (BSN), with an expected graduation in December 2017. The fall 2015 scholarship recipient started for JU’s 2013 conference championship women’s soccer team.

Sturgis joins summer 2015 scholarship recipient Kathleen Joyce, 26, who plans to complete her BSN at JU in August 2016. Joyce graduated from Stetson University in 2011, then received a master of science in bioethics from Union Graduate College and Mount Sinai School of Medicine in 2013. Her nursing areas of interest are in pediatrics, research and oncology, and she has conducted research in pediatric psychotropic medication practices and pediatric asthma management. She has worked in the pediatric center for pharmacogenomics and translational research at Nemours Children’s Clinic since 2011.

“I love the JU Nursing program so far, and I am so thankful to JU and the Carter family for giving me this incredible opportunity. It would not be possible without them,” Joyce said.

Both cared for Catie Carter as she underwent complicated and often grueling treatments at Nemours Children’s Clinic and Wolfson’s Children’s Hospital for neuroblastoma, from 2001 until her death at age 15 on June 15, 2010.

The origin of the scholarship is tied to the dedication and work of Catie’s parents, Jimmy and Kerri Carter. Jimmy, through his Florida Carter Corp., has donated numerous hours in site preparation work at JU for Dolphin Green, the intramural fields in the valley, the Swisher Golf Facility and more. His in-kind work resulted in the ongoing scholarships after Catie’s death.

To learn more about the Brooks Rehabilitation College of Healthcare Sciences, visit http://www.ju.edu/chs.