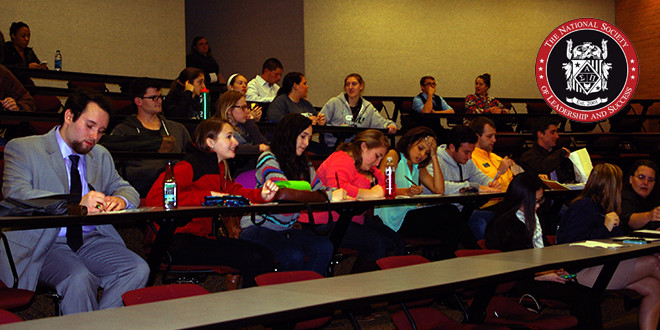 Jacksonville University encourages its students to be proactive.  One areas of focus of the Davis College of Business is leadership development. Last year Aviation Management student Robert Dougherty, from Houston, Texas, approached the Dean of the Davis College of Business to start a student organization that would focus on building leadership skills.

Dougherty explained, “I was looking for other ways to get involved at JU and the Jacksonville community at large.  Through my research I found a national organization that would be a great fit for building my leadership and professional skills.”

With the help of classmates in the spring of 2014 a chapter of the National Society of Leadership and Success, a global organization, was formed at Jacksonville University. Its mission is to build leaders who make a better world. This was very fitting since Dougherty’s own mission was to infuse his passion for leadership into a new organization at JU.

Interim Director of Student Solutions and JU alumna, DaVina Hamilton, was asked to join the Society as a co-advisor. “I have a natural passion for leadership. It doesn’t matter in what capacity I exemplify it,” described Hamilton. “If I could facilitate leadership development of students outside of the classroom, I am all about that.”  News about the organization spread like wildfire and approximately 140 students were inducted into the National Society for Leadership and Success. This made the National Society for Leadership and Success the largest student-led organization on campus.  “Word of mouth is huge on this [JU] campus,” noted Hamilton. “The students’ excitement led others to question ‘why shouldn’t I get involved?’”

To be considered for membership, students must exhibit high leadership potential, as all academic majors are invited to apply.  Members are required to pay dues, providing access to a professional dashboard and other privileges. The dashboard contains scholarship information, leadership certification, professional coaching, networking opportunities and more.  In addition to the dashboard, students can listen to professional speakers who broadcast nationally on relevant topics. During these real-time events, students are able to engage with the speakers and receive advice.  “These broadcasts were an outstanding benefit to me and other members.  The speakers and the experiences I have had with the organization thus far have been truly inspirational,” Dougherty explained.

Members receive weekly inspirational quotes to “kick off the week on the right foot.”   A large focus is on peer-to-peer mentorship.  After goals are set, members hold their peers accountable for goal completion. “It is inspiring to know that others are as passionate about leadership as I am,” Hamilton commented. “Seeing what was done within the first couple of months of inception makes me hopeful for the success of this group in the future.”

In addition to the National Society of Leadership & Success, Dougherty is involved with Alpha Eta Rho (Aviation fraternity), the Davis Entrepreneurs Organization, Alpha Sigma (Aviation Honor Society), Aviation Association of Airport Executives,  is the DCOB representative for the Jacksonville University Student Alliance (JUSA), and is a member of the Green Key Honor Society.  This summer, Dougherty completed an internship with GoJet Airlines in St. Louis, with which he will continue during the school year on remote basis.  He will also begin a remote internship for the headquarters of the National Society for Leadership and Success this fall. Dougherty hopes to use his passion for revenue management and strategic analysis for an airline or consulting firm one day.  Regarding graduate studies, Dougherty would like to attend Harvard University.

Don Capener, Dean of the Davis College of Business exclaimed, “Robert is one of our rock stars in the Davis College at JU. He recruited 100+ members who have paid for its benefits and networking events. The success of this group is due to his passion and drive.”