Home » All Sections » Kids by the hundreds will run, bike and swim their way to health in the First Coast Kids Triathlon this weekend at JU 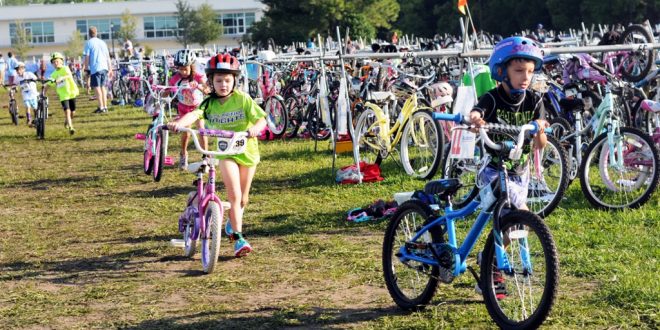 Kids by the hundreds will run, bike and swim their way to health in the First Coast Kids Triathlon this weekend at JU

Hundreds of kids will run, bike and swim their way through one of the biggest youth triathlons in the country this weekend at Jacksonville University.

The nonprofit Kids Triathlon Inc. puts on the largest series of kids triathlons in the world, with six events in six cities this year. It brings its 8th Annual First Coast Kids Triathlon to campus this Sunday, June 12, with more than 1,400 kids ages 6-15 expected. The event raises money for schools and is in partnership with JU, the YMCA of Florida’s First Coast, Baptist Health’s CareSpot, Firehouse Subs, Wolfson’s and Nemours children’s hospitals, the Jacksonville Jaguars Foundation, The Players Center for Child Health and other sponsors.

UPDATE: Video of the June 12 event is below:

This is the third time JU has hosted the event. Triathlon is one of the fastest-growing sports in the world, according to race organizers, and kids triathlons are a vital part of the trend. The First Coast Kids Triathlon is sanctioned by USATriathlon, the governing body of the sport in the U.S. under the auspices of the U.S. Olympic Committee.

“There is no better way for any child to experience the benefits of a healthy lifestyle focused on daily exercise and good nutrition,” the Kids Triathlon website states.

Four components – swimming, biking, running and transitions — make up the triathlon, with youths competing against other kids in their same age group. Participants wear RFID computer chips on their ankles during each part of the race to track their times.

Since early March, 15,000 kids have benefited from in-school education programs and hands-on training courses with partner YMCA – all provided for free. According to Tom Gildersleeve, Event Director, 42 local schools have organized teams and kids from across Florida will participate.

This year will also include “XClass Races,” which will will feature 123 of the top youth triathletes in Florida who together have already completed more than 1,500 triathlons.  As its popularity continues to explode, kids are adopting triathlon as their primary sport, and Women’s Triathlon became an official NCAA Division I emerging scholarship sport in January 2014.

Money raised helps fund an outreach program in schools across the region. Through it, First Coast Triathlon is expected to engage more than 20,000 students in discussions about the importance of being healthy, active and responsible. Participating schools also get a share of more than $15,000 in donations to support their efforts to motivate kids to exercise every day and watch what they eat.

For more on the triathlon, please visit kidstriathloninc.org. For a map of the event at JU, click here.