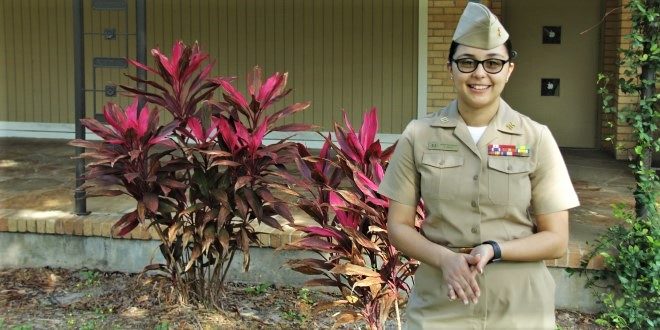 Since she was young, junior physics major Vanessa Rodriguez has wanted to join the US Navy. Her father served in the Navy for 23 years. That’s why Vanessa developed a fascination with ships.

And recently, Vanessa became only the second female since 2011 chosen for the highly competitive U.S. Navy Submarine Warfare Officer program.

“She’s well beyond her years,” says US Navy Capt. Glen Leverette ’96, who leads the University’s NROTC program. “She’s a student in my unit who has really impressed me with her leadership and her grit. She has the ability to cooperate, collaborate and communicate. Those are things we teach in our Naval officers.”

The application process for the submarine program is arduous. The Navy allows college juniors who desire to serve on submarines or as nuclear warfare officers to apply only with a recommendation from their commanding officer. And while the submarine warfare program has been available to University NROTC participants since the unit was founded in 1971, it opened to women candidates only in 2011. Capt. Leverette says sending two female students into the program within 9 years is an historic achievement.  Physics and mathematics double major Misha Shockley ’18 became the first chosen in 2018.

Vanessa says she’s always known what military life had to offer because of her father. Growing up, most children looked forward to being princesses, firemen or president. She, however, says she always imagined a different path for herself.

So as soon as she could, Vanessa joined the ROTC program at her high school. She learned about the submarine warfare program after a first-year college ROTC course exposed her to the opportunities available to her after graduation.

“There are different people that join ROTC for different reasons, and they all come from different backgrounds,” she says “One of the things ROTC taught me was that when you’re a leader of a group of people, you’re not all going to think the same. ROTC taught me to diversify my thinking in terms of how I’m going to get the overall objective done, which helps translate to other things in life.”

Vanessa’s ability to communicate her thoughts is something that sets her apart, says Dr. Brian Lane, Jacksonville University’s Physics Chair, and one of Vanessa’s former professors.  Dr. Lane ’03 strives for to help all people gain a better understanding of physics, and focuses on encouraging women, in particular, to pursue education and careers in the field.

“I first taught Vanessa in Introductory Physics. She’s turned in every assignment, which is a big deal in a physics class,” he says. “She’s also done very high-quality work that goes beyond just solving the problem and getting the answer. She’s able to do an excellent job of being a communicator of physics. Not only does she understand the content, but she can communicate and interact with others about the content.”

Vanessa is a leader who has achieved academic excellence, and most importantly, made history on our campus, Capt. Leverette says.