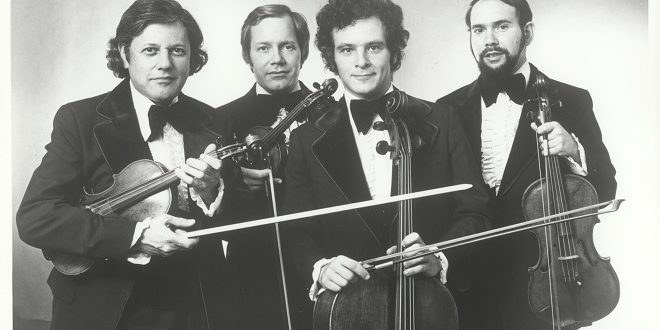 Mann passed away earlier this year at the age of 97. He is survived by all three members of the Juilliard String Quartet who frequented JU as guest performers in the 1980’s. Earl W. Carlyss (violin), Joel Krosnick (cello), and Samuel Rhodes (viola). Mann, one of the group’s original founders in 1946, and first violinist, remained affiliated with Juilliard and its Quartet for 52 years.

The New York Times lauded Mann days after his death as responsible for “the ensemble’s continuity of style and the maintenance of its stature in international chamber music circles.”

JU’s College of Fine Arts first invited the Quartet to campus in March 1983, and again the next year. That 1984 appearance helped mark the University’s Golden Anniversary celebration. In that same year, the Quartet toured Europe and made seven New York appearances.

On March 4, 1986, following a third performance on campus, all four members received an honorary Doctor of Music degree.

Mann held six honorary degrees at the time of his death. The JU honorary degree, described the group as “one of the world’s pre-eminent chamber music ensembles and lauded in international circles as the ‘first family of chamber music.’” Also listed were many stunning accomplishments of Mann’s, including his composition of more than 70 orchestral works. His active career as a conductor took him around the world. And most significant to the colleges he frequented, Mann acted as advocate, financial supporter, and mentor to young musicians globally.

He played with the Portland Youth Philharmonic as a youth, despite early aspirations of becoming a forest ranger. A graduate of Juilliard, his New York debut was held two days after the attack on Pearl Harbor. Immediately following graduation, he answered the draft, enlisting in the U.S. Army.

Mann would have celebrated his 98th birthday just two weeks ago.

The surname “Krosnick” should sound familiar to the Jacksonville University community. In fact, cellist Joel Krosnick is the brother of retired JU Professor of Music Aaron B. Krosnick, also a notable performer and former concertmaster of the Jacksonville Symphony. Aaron Krosnick is also the husband of Mary Lou Wesley Krosnick, longtime JU professor and accomplished pianist.

Many of those guests historically came at the behest of the College of Fine Arts and included Aaron Copeland, Bob Hope, Jack Benny, Sir Rudolf Bing, Arthur Fiedler, Irving A. Fein, and Boris Goldovsky, as well as a host of present-day artists.

The College of Fine Arts Performing Arts Series invites the Jacksonville community to its upcoming 2018/2019 season of on-campus performances and exhibits.