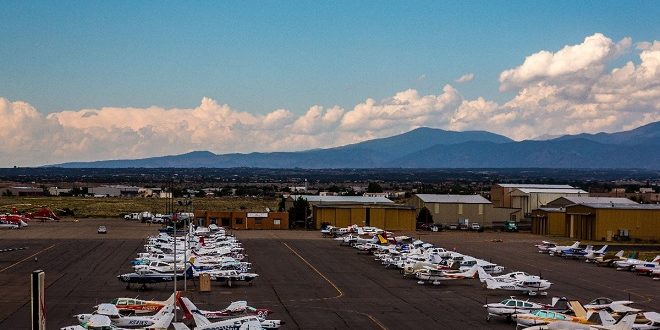 The 2018 42nd Annual Air Race Classic, today’s descendant of the Powder Puff Derby, has been a Jacksonville University (JU) tradition since 2010. 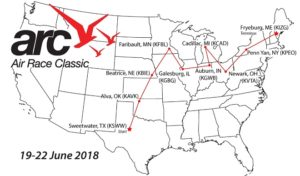 The 2,400-mile transcontinental competition has roots to the 1929 Women’s Air Derby. Open to all women with fixed wing aircraft from 145 to 570 horsepower, the objective is to “fly the perfect” cross-country.” The spirit of camaraderie at ARC, even in the midst of keen competition, is always high, giving pilots an opportunity to hone their techniques.

Women pilots of all ages and from all walks of life compete in pairs and teams of three. Racers range from college students to veteran pilots, one in her 80’s. They hail from more than 30 states, five nations, and 18 universities.

Both have since moved on to successful flying careers. This year’s competitors, Rachel Chaput and Madison Bright (team #44), set out together to recapture the trophy for JU.

Though that first-place spot eluded them, the Flying Fins’ journey is an inspiration. Here’s the play-by-play, as reported by Chaput, Bright, and Aviation Professor Ross Stephenson. Through emails, social media, and text, join JU’s dynamic duo in the cockpit. The adventure begins with getting their aircraft to the start line…

Rachel and Madison are moments away from landing at Lakefront Airport in New Orleans for their first day of travel to Sweetwater, Texas. Good thing they left early this morning to beat the thunderstorm buildups, just take a look at the development of the T-storms in the radar picture! Should be less T-storms tomorrow as they leave the moist air of the Gulf Coast and venture into the drought ridden areas of Texas. ~Ross

Rachel and Madison had an enjoyable stopover in New Orleans.  As you can see from the photos, they partook of the culinary delights of the French Quarter! In about 15 minutes, the racers will depart Lakefront Airport for a fuel stop in Longview, Texas, and then continue on to Sweetwater. ~Ross

Our racers have made it to Sweetwater! They departed the partly cloudy skies of New Orleans this morning, crossed the Mississippi, stopped in Longview for gas, then made it smoothly into Sweetwater. This weekend our racers get to enjoy the excitement and camaraderie of pre-race events. ~Ross

They had a banquet last night and are taking off tomorrow morning between 8 and 9. ~ Ross

Getting ready and wishing our WASP a very special 97th birthday on the way out! ~ Flying Fins

Rachel and Madison are in their plane and ready to go! The first five aircraft have departed Sweetwater for Alva, Oklahoma. Winds are light and out of the south moving toward a low pressure area around the Colorado, Nebraska, and South Dakota areas, which means they will have a favorable tailwind. The girls are certain they will make it to their second stop today: Beatrice, Nebraska. However, the weather at their scheduled third stop—Faribault, Minnesota—is not looking good. The field has been weathered-in since yesterday morning, four statute mile visibility, misting, and an overcast layer at 800 feet. ~Ross

Rachel and Madison have completed the first leg of the race! Weather for their departure was great, and they used maneuvering airspace to get up to kamikaze diving speed to cross the starting line. They had to make one small deviation around some clouds along the route, but maintained 3,500 feet for much of the route. Now, they’re fueled up and ready to depart on the next leg to Beatrice, Nebraska. They’ll most likely stay in Beatrice overnight. The weather at their third stop is still very bad, and it doesn’t look like it will clear up until the stationary front around Minnesota, South Dakota, and Iowa moves out. ~Ross

Almost got to do a dual flyby with Classic racers #14. We ended up passing them before the timing line, but glad to say we are safely on the ground. We spent the night in Nebraska last night, and as of now, no one has left. We’re waiting for more updates from ARC or for the weather to clear so we can continue on to the next stop. ~Flying Fins

Made it to KGBG and now we’re staying the night in Illinois because of weather. We hopefully will be continuing on to KGWB (Auburn, IN) tomorrow morning! ~Flying Fins

Rachel, Madison, and the rest of the racers have been hunkered down for weather in Beatrice since yesterday midday. The third stop was totally weathered-in, but cleared for a very small window yesterday afternoon. Six racers decided to go for it and took off for KFBL (Faribault, MN), but the weather deteriorated enroute, and the racers had to divert, with one aircraft shooting an instrument approach into KFBL. Unfortunately for those racers, they are no longer in contention. Either their total time is still ticking since yesterday, or they went in instrument conditions, which is not allowed during the race. Race officials have decided to delete KFBL from the route, and have instructed the racers to fly to the next stop to begin the race from there. Madison and Rachel will be leaving KBIE (Beatrice, NE) in about an hour. Once they arrive in KGBG (Galesburg, IL), the race will resume. ~Ross

Not a whole lot has happened since the last email. Basically, a lot of waiting on the racers’ part.  Weather has plagued the majority of the course, and race officials have finally determined that the rest of the race will only consist of the last leg to Maine. All racers have been instructed to get to Penn Yan, New York by any means possible, IFR (Instrument Flight Rules) or VFR (Visual Flight Rules), and the race will resume from there. Currently, Rachel and Madison are enroute to Cleveland for a stop for gas, then will continue onto Penn Yan. Sunset is 8:50 PM in Penn Yan, so I don’t think they will continue on to Maine today, just not enough daylight. The weather has really destroyed much of the race, with racers strewn all over the midwest. Rachel and Madison have very good times on the only two legs that count so far. If they scorch across the sky to the finish line, they have a very good chance of winning! ~Ross

Made it to Maine. Having finish line drinks and awaiting results! ~Flying Fins

The Flying Fins placed 25th out of 55 teams (a total 119 pilots) with some teams never crossing the finish line. They faced inclement weather and fierce competition from Western Michigan, Ohio State, and Auburn University. But this year’s results won’t stop Jacksonville University aviators from reaching for the top ten in 2019.

For more information about the Jacksonville University School of Aviation, email Nikki Bobbin at aviation@ju.edu. If you would like to attend an Aviation info session and JU campus tour, go to https://apply.ju.edu/portal/campustours and schedule a visit today.