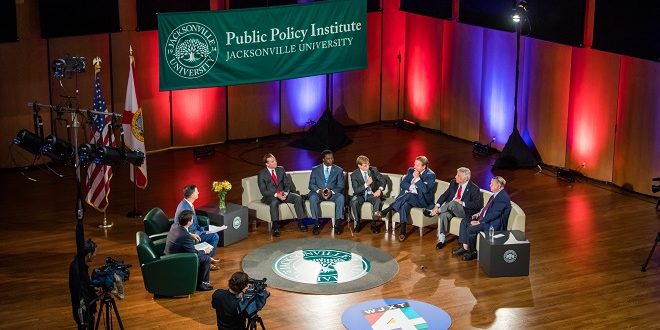 Jacksonville’s Consolidation story is a narrative that must be told.

In A Quiet Revolution: The Consolidation of Jacksonville-Duval County and the Dynamics of Urban Political Reform, author Richard A. Martin said:

“This is a story that proves American democracy is dynamic; that the democratic process has sufficient vitality and flexibility to adapt itself to changing times and conditions… because I am certain that what has happened in Jacksonville and Duval County, Florida, has meanings for Americans everywhere.”

“We have one common denominator: we all love Jacksonville.”

Co-moderated by Director of the JU Public Policy Institute (Institute) Rick Mullaney and WJXT anchor Kent Justice, supporters and critics of Jacksonville government came together for an around-the-table discussion of the history leading up to the events of 1967-68, the 50 years since Consolidation, and what the future may hold for the city.

“We are grateful for the roles these mayors have played over the last half-century in shaping Jacksonville,” said Mullaney. Jacksonville University President Tim Cost echoed that sentiment as he welcomed guests. “We offer a welcome and our thanks to these six gentlemen who gave their years of public service to make Jacksonville a better place.”

The Impact of Consolidation

The October 1, 1968 Consolidation of Jacksonville and Duval County remains the most significant local government restructuring in Florida history, and one of only a few nationwide, with repercussions that spanned both miles and years. Many recall the arduous process that transformed Jacksonville from the “Cleveland of the South” into the “Bold New City of the South.”

Born the same year the Florida Constitution underwent the alteration that permitted Jacksonville to even consider altering its governmental structure, Godbold is now the oldest living mayor at age 84. After serving across the gap of pre- and post-Consolidation, he later discovered exactly what it meant for Jacksonville to operate with a strong-mayor form of government which more closely followed the federal model.

Peyton, who once served as what he termed Godbold’s one and only intern, said, “After sitting in that chair and that office, my appreciation for how difficult Consolidation must have been increased ten-fold. Now our city has an enormous political and economic advantage.”

The most notable Consolidation player was Mayor Hans Tanzler who passed away in 2013, at the age of 86. Serving Jacksonville for 12 years as mayor, he was the last mayor under the old city-county system and the first under the newly consolidated Jacksonville.

Each mayor expressed what he perceived as the best gift Consolidation offered the city after a tumultuous history of corruption, natural disasters, disaccreditation of schools, and failing city services.

Curry said, “Here’s the thing about historic moments like this: when you’re in it, you don’t always see it. The spirit of Consolidation really is one city, one Jacksonville. It’s about getting city services to our people.” Delaney led the audience in a good laugh over the Jacksonville Jaguars’ recent win and went on to name the NFL presence here as an outcome of Consolidation. Without that historic restructuring, he said, “We would have been another version of Detroit.”

Both Curry and Mullaney emphasized the impact of the strong-mayor form of government made possible by Consolidation, a legacy upon which each mayor since has built.

Mayors were asked to list what each considered the accomplishments that most defined their time in office. For Curry, it is pension reform and neighborhood investment, a list he hopes to expand should he win re-election in 2019.

Peyton singled out Rally JAX and Jacksonville Journey while Delaney counted the Better Jacksonville Plan and Land Preservation Project as his greatest contributions. For Brown, the creation of the Downtown Investment Authority and a re-organization of the city’s Office of Economic Development made the top of the list, and for Hazouri, improved air quality and the elimination of Jacksonville’s toll booths.

The Future of a City

The first African-American to hold the office of mayor in Jacksonville, Brown aptly noted that Consolidation set the tone for the 21st century. He said, “The question is, how will we move forward? And the key is making sure that we invest in all of Jacksonville, not just majority communities. That’s the challenge.”

Among these well-known leaders who all once stood “in the arena,” Jacksonville’s biggest priority is public safety. Also mentioned were the addition of more at-large council members, greater centralization of city procurement services, getting serious about sustainability, eliminating partisanship in the election of certain Constitutional officers, and increased funding and autonomy for Jacksonville’s downtown and urban core.

Peyton described downtown Jacksonville as having lost its voice, something on which all six mayors agreed. “We’re worth investing in,” said Peyton. “Jacksonville shouldn’t be afraid to invest in itself.”

Jacksonville’s unique political history and structure hold a significant place in the curriculum of the Institute, requiring first-year Master of Public Policy (MPP) students to study the topic at length.

In attendance last night was a wide range of Institute faculty and students, including the newest MPP cohort members all currently enrolled in Introduction to Law and Public Policy, taught by Mullaney.

The Institute seeks to shape the future of local, state, and national public policy by preparing a ready generation of leaders and policy experts, and by providing a neutral gathering place for policy discussion, education, and collaboration.

And what better event to host than one honoring a historic moment of citywide collaboration—the Jacksonville-Duval Consolidation.

For more information about the Institute, visit https://www.ju.edu/publicpolicy/, or email the Institute at ppi@ju.edu. To listen to the latest broadcast of the Institute’s Policy Matters, visit WJCT online.

To watch the live event, tune into WJXT-Channel 4 at 9 a.m. Sun., Sept. 30, for a special episode of  This Week in Jacksonville.

To view a digital copy of Jacksonville’s 1967 Charter, visit the State University Libraries of Florida. For details on how to obtain an updated edition of Richard Martin’s The Quiet Revolution, contact the Jacksonville Historical Society.