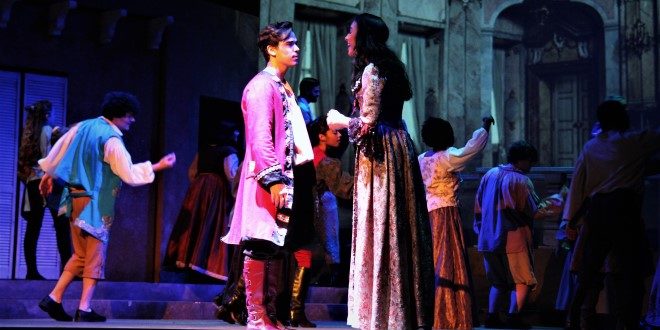 Not long ago, Director and Linda Barry Stein College of Fine Arts Associate Professor Deborah Jordan snapped a photo of a full moon over the Matanzas Bay that provided her with the inspiration to stir together the elements that give this production its local flavor.

“The photo had water, a balcony and palm trees. What more could you want for inspiration?” says Jordan. “By placing the action close to home and examining Florida’s unique history, this production promises to be an educational experience for both students and audience while also infusing the production with the adventure and tragedy contained in the best pirate stories.”

Jordan solidified her concept during a research trip to the Pirate Museum in St. Augustine, where she examined the struggle between feuding French and Spanish families also dealing with the many pirates plundering the coast. She also took a two-week trip to Spain for further investigation. Jordan says her research turned up the unique mix of passion, adventure and war that sparked her imagination.

It also led her to envision a production with so much swashbuckling action that she needed to bring in Lee Soroko, a Certified Teacher and Advanced Actor Combatant with the Society of American Fight Directors, to choreograph the combat scenes.

“In the first scene alone, we have three separate swordfights going on,” Jordan says, “and there are plenty more acts of violence: Tybalt kills Mercutio, Romeo kills Tybalt, Juliet kills herself with a knife.”

The show has a cast of approximately 30 and features sophomore theatre major Angel Gavillan as Romeo and freshman theatre major Svetlana Davidenko as Juliet.