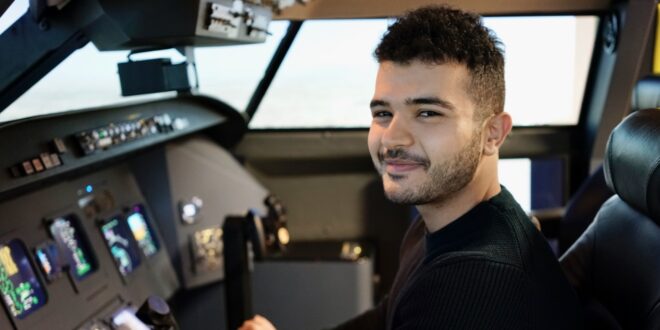 From the time he was a baby, senior Joseph Elias has been taking flights across the world. At 21, he’s probably logged more miles than some people will in a lifetime.

Elias was born in Lebanon, grew up in Africa and now calls Sao Paulo, Brazil his homebase. He then moved to the U.S. to attend JU to study aviation management.

With all the travel he did growing up, Elias said it only made sense that he pursued a career as a pilot.

“I think that’s what ignited that passion,” he said. “As soon as I came out of the womb, it was like ‘Take him to the airport, he probably has a flight to catch.’ That’s because my family has always been moving around. My family tells me that I’ve been obsessed with flying and planes since I was a baby. It’s one of those things you just don’t have to think about. It was just there.”

He saw Jacksonville University as the perfect place to pursue that dream.

“I didn’t apply to any other college,” Elias said. “It’s not common to find a college that has a flight training program that’s directly connected to a degree. I think that’s a huge advantage that JU has. Obviously, the campus was a plus and the weather. My selling point was that JU is a small community. You feel more looked out for, more cared for and more recognized when you’re in a small community.”

And it’s proven to be the right choice for Elias. He’s gotten involved on campus from the get-go, now balancing roles as a math and aviation tutor, Resident Advisor and Community Leader for Oak Hall and a barista at Starbucks.

He’ll also be featured in Jacksonville University’s episode of “The College Tour,” set to air on Amazon Prime in August.

Elias said it’s important for every student, especially international students, to step out of their comfort zone in college. Through doing that, Elias said he’s made lifelong friends and done things he may not have considered before.

“They should put themselves out there,” he said. “Go for a job, even if you don’t need one, but go for the experience. If you get an opportunity to be on an executive board on campus or in a club, go for it. Do things that will help you grow and once they do, they’ll realize that they’re going to feel more at home.

“You never know when something small could lead into something bigger.”

He earned his private pilot license while at JU, and is looking to complete the final certifications to become a commercial pilot following graduation. Following graduation, he’ll be able to finish his licenses wherever they’re offered.

Knowing Elias, that could be just about anywhere.

“My goal at the end is to work for an airline company,” he said. “I’m about to decide where I’ll finish my licenses. I don’t know yet. It’s nerve wracking but exciting.”