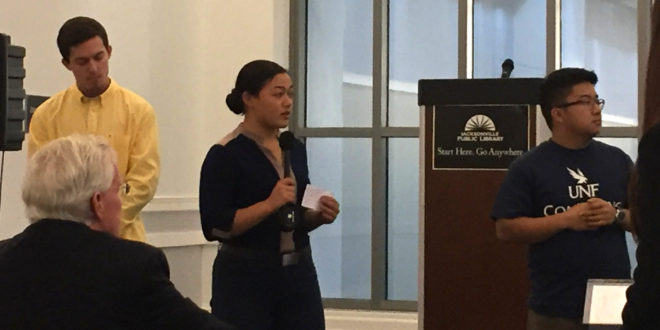 How do you solve the riddle of bringing together a sprawling city of nearly one million people, from dozens of separate neighborhoods and diverse subgroups, to help residents find a common bond and unique culture?

Turns out, there may be an app for that.

The app builds digital and virtual ties first before uniting people in person from across the River City’s almost 900 square miles. Users can enter their various interests, and then through gameplay and other means are offered incentives to go to new businesses, events and volunteering opportunities throughout the city that might intrigue them.

More points are earned for locations farther from users’ homes – places they might not likely have gone otherwise.

“That way you get different people from all over to come to different events in different locations,” Burris said. “You can meet up with them, talk, make plans and even create your own events on this app.”

HackaJax, sponsored by JU, was part of Innovation Week presented this month by JAXCOE (Jacksonville Community of Entrepreneurs). The week included a full slate of events for those in Northeast Florida’s “innovation” economy, from entrepreneurs, artists and small business owners to musicians, investors and educators. 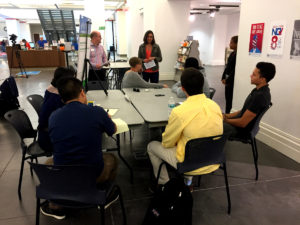 At HackaJax, two teams competed – one with four members, the other with three, and featuring a mixture of students from JU, the University of North Florida and Florida State College at Jacksonville. They were asked to solve a long-time dilemma in Jacksonville: bringing its split personalities together across a large land mass.

Burris worked with two students from UNF, and the trio brainstormed for six hours before creating a prototype of the app and presenting their solution in pitch style to the judges. Winning team members received a cash prize, presented their solution on the event’s main stage at the Innovation Connection Conference, and they now qualify as finalists in United Way of Northeast Florida’s Upstream Program to win a $10,000 grant to help kick-start their idea into reality.

“I learned a lot about handling stress and pressure. The focus was intense,” Burris said. “I made connections with different people with similar interests. We hope to go further with this project. The other students were great teammates, and I couldn’t have done it without them.”

Burris, a JU Naval ROTC member who plans to join the Marines upon graduation, credited the University with helping create a positive environment of give-and-take and collaboration that helped her win the event.

“JU played a large part in me being able to be successful. They have similar events like Dolphin Pitch that I can be part of, and they’re really centered on the students,” she said. “The whole idea is, how do you apply what you are learning in class to real life? My professors act as mentors who coach you on that. The JU faculty members have been very involved in the success of students.”