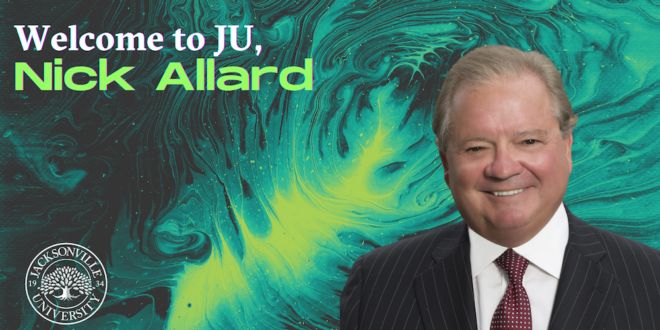 After a comprehensive national search that attracted distinguished candidates from all over the world, Jacksonville University today announced the selection of its College of Law founding Dean, Nicholas W. Allard, Esq., along with an administrative leadership team for the College.

A graduate of Princeton (1974), Oxford (1976), and Yale Law School (1979) and a prestigious Rhodes Scholar, Allard is currently senior counsel at Dentons, the largest law firm in the world with offices in more than 80 countries. He served as Joseph Crea Dean (2012-18) and concurrently as President (2014-18) at Brooklyn Law School (BLS) where he also has been a tenured professor. During his time there, he launched several noteworthy initiatives designed to make legal education more affordable, accessible, and valuable.

“Nick Allard is a world-class legal scholar and administrator, who is widely recognized and respected as both a thought leader and an educator,” said Jacksonville University President Tim Cost. “Jacksonville University is honored to welcome him as founding Dean of our College of Law, where he will have a tremendous impact on shaping the next generation of legal minds.”

Allard is an experienced educator, a published author, a proven academic leader, and a trusted public policy advisor. He is widely recognized by peers and the media as a leader in higher education, law, government relations and politics, who lends his expertise to complex legal and ethical issues. Before joining Brooklyn Law School in 2012, Allard chaired the preeminent Public Policy Department and the Government Advocacy Practice Group at Patton Boggs in Washington, D.C. His clients included domestic and global startups, Fortune 500 companies, nonprofits, and public and private universities. Prior to joining Patton Boggs, he was a partner at Latham & Watkins, where he helped establish the firm’s Global Government Relations Group.

“The opportunity to serve as Jacksonville University’s Founding Law Dean offers a platform like no other to share my passion for law and the honorable profession and put my experience and relationships to good use,” Dean Allard said. “I look forward to building upon years of preparation led by President Cost, the encouragement and support of Jacksonville, and working synergistically across disciplines with the University’s vibrant community of scholars and teachers. Our goal is for the College of Law to be in the vanguard of providing students outstanding, forward-looking preparation and practical training for future success and service.”

For many years, Allard also has held several leadership positions as a Rhodes Scholar alumnus. For more than two decades he has served on and led a district Rhodes Scholarship Selection Committee awarding perhaps the best known and one of the most respected international graduate fellowships. He is the President of Oxford University’s Merton College Charitable Corporation and is an elected member of the College’s alumni board, the Merton Society. While serving on Princeton University’s Alumni Council Executive Committee, among many other leadership roles, Allard chaired the Committee on Awards for Service to Princeton, the Committee on Nominating Alumni Trustees, and the Princeton Schools Committee of more than 8,000 alumni who interview applicants from all over the world.

As both an academic and a legal professional, he is the recipient of many honors and awards, including being named a Bodley Fellow of Oxford’s Merton College in 2020, and being acknowledged as a Visionary by the “National Journal-Legal Times.” He also served as a member of the American Bar Association’s Standing Committee on Government Affairs, as well as its Task Force on Lobbying Reform, and he chairs its Standing Committee on the Law Library of Congress.

“We are progressing at a healthy pace to enroll our first class of students in the Jacksonville University College of Law, which will begin classes on August 8,” said President Cost. “At the same time, we are moving forward very deliberately with a leadership team of talented, diverse educators and administrators who will model our University’s values and our student-centered culture. Fortunately, Jacksonville University benefits from a substantial roster of legal scholars currently on our campus.”

Jacksonville University named a team of four senior administrators who will guide the College of Law through the arduous process of accreditation and strategic, measured growth in its early years.

Joining Dean Allard in the role of Vice Dean, the University names Margaret Dees, Esq., a proud Jacksonville University alumnus and Cabinet member who most recently served as the Senior Vice President of Economic Development & External Engagement, advocating for the University with elected officials and driving public and private economic investment that benefits the University and the broader community. Dees also has been an instrumental leader and a forceful advocate to plan, develop and establish the Jacksonville University College of Law, serving this year to date as ​​Chair of the Law Operations Team.

Dees earned her Juris Doctor from the University of Florida’s Fredric G. Levin College of Law and served as senior counsel at Holland & Knight LLP, where she supported clients in areas such as government relations, labor law, higher education, environmental litigation, contracts and more. She’s a committed, engaged member of various professional organizations, including the American Bar Association, the Florida Bar, and the Jacksonville Bar Association.

In addition to the Dean and Vice Dean, the University installed two leaders to provide critical administrative support for College of Law faculty and students. Dr. Courtney Barclay will oversee Academic Affairs within the College. She is a well-respected JU associate professor in the Communication Department, who also earned her J.D. from UF along with a B.S. in Public Relations, and a M.A. and Ph.D. in mass communication. Dr. Barclay teaches undergraduate courses in communication law, public relations, and social media management. She also serves as a JU Pre-Law advisor and as the faculty advisor of the student-run public relations and advertising agency at JU, Phin Communications.

Supporting the needs of law students as Assistant Dean of Student Development & Practice is Katie Griggs, Esq. Most recently, Griggs worked as Program Manager for the highly-regarded Jacksonville University Public Policy Institute. She received her Bachelor of Science in Business Administration from the University of Florida and her J.D. from Florida State University College of Law. Her prior experience includes serving as a prosecutor, corporate contract negotiator, and higher education professional. Prior to joining Jacksonville University, Griggs worked at two law schools in the areas of academic success, bar preparation, experiential learning, and career services.

Classes at the Jacksonville University College of Law begin the second week of August at the University’s downtown location within Vystar Tower.