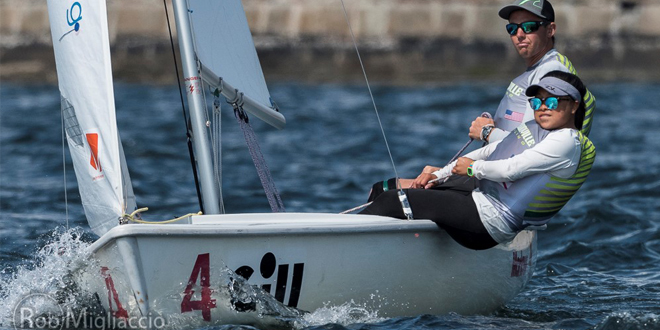 This spring, as the Jacksonville University campus prepared for final exams, the JU Sailing Team was preparing for a test of a different kind: the Inter-Collegiate Sailing Association’s spring National Championships in Newport, Rhode Island. For the first time in the program’s six-year history, the team competed in all three spring National Championships: the qualifying Semi-Finals for Women’s and Co-ed, as well as the Team Race Finals (see sidebar).

Continuing the team’s string of stellar firsts, in Newport JU Sailors Alfonso Garcia Bringas ’20, Jack Gower ’20 and Daniel Ofarrill ’22 won the Co-Ed Semi-Final “A Division,” besting the likes of Stanford, Navy, Dartmouth, Brown, Tufts and Boston University. With the A Division win and a strong showing in B Division, the team reached the Co-ed Finals for the first time in program history, by beating teams including Northwestern University, University of Notre Dame and University of Michigan. JU ultimately finished 16th in the country in the Co-ed Finals.

“Making the finals at the National Championships has always been our ten-year goal, and we’re achieving it in only six years,” said JU Sailing Team Head Coach and Waterfront Director Jon Faudree. “I’m so proud of all of the hard work our kids have put in – in the classroom, in the gym, and simulating race conditions during practice – to learn new strategies and become better decision-makers on the water.”

In total, the team competed in 43 regattas around the country and traveled more than 30,000 miles in pursuit of its success this season.

Since its founding in 2012, the JU Sailing Team has grown from five students who learned to sail on campus to nearly 40 athletes from 12 states and 8 countries.

“My first year on campus, I wandered around looking for kids who looked like athletes, and convinced some of them to try sailing,” Coach Faudree said. “Now, thanks to our consistent high performance and a lot of time on the road recruiting, JU is attracting some of the best youth sailors in the country and internationally.”

“Making the finals at the National Championships has always been our ten-year goal, and we’re achieving it in only six years.”

And JU sailors truly put the “student” in student-athlete: thirteen sailors made the Dean’s List in Fall 2018, and five have been named Academic All-Americans over the past two years. JU Sailing alumni are making major contributions in the fields of medicine, natural sciences, and business.

They are employed at the top oceanographic research facility in the U.S., in the Naval Officer Candidate School as a helicopter pilot, as a nurse at St. Vincent’s Hospital here in Jacksonville, and as a marketing executive for one of the largest marine marketing companies on the East Coast. They are pursuing graduate degrees at some of the most prestigious schools in the country, including the Warren Alpert Medical School of Brown University and the Fu Foundation School of Engineering and Applied Science at Columbia University, as well as the Jacksonville University Master’s in Business Administration program.

The team is a force for good both on and off the water. Coach Faudree and his sailors regularly volunteer their time to help grow the youth and high school sailing programs in Jacksonville, including at the Bolles School and the Florida Yacht Club, with future plans to help expand water sports and education opportunities for kids in other parts of Jacksonville, especially Arlington.

And the team is intensely focused on environmental sustainability and increasing awareness of and access to Jacksonville’s great natural resource, the St. Johns River. During Charter Day 2019, the Sailing Team cleaned up Exchange Club Island just offshore from campus, collecting enough trash and recyclables to fill more than two sailboats.

Coach Faudree says, “One of my main goals when I arrived here was to promote sustainability, and increase the number of people focused on caring for the water and the planet. Our approach has been to grow the coolest sailing team in the country and use the team’s influence to connect people to the environment.”

Since the team’s founding, JU has increased its sustainability commitment significantly, including being the first small, private university with a Sustainability major. Across campus, there are now more than 1,300 recycling bins as well as 12 hydration stations; 40 native trees were planted in spring 2018 to increase the natural tree canopy; and JU is home to one of just two Chick-fil-a locations that have banned the use of Styrofoam.

Says Coach Faudree, “We hope that as the team continues to grow and succeed, we can also continue to grow our influence on campus and in both the Jacksonville community and sailing community nationally, to be conscious consumers that prioritize taking care of the environment.”