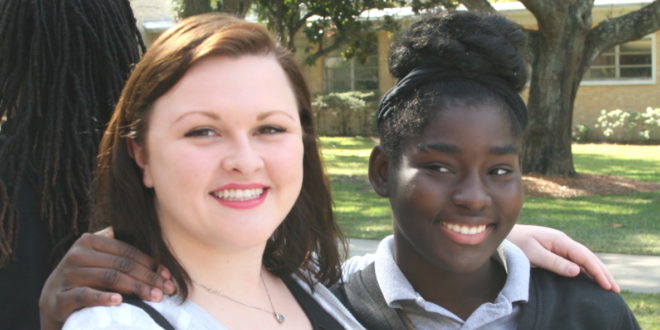 College students can do wonders for a youth with a half-semester of mentoring – or even a half-day.

The results of both approaches were on display on the same day recently as Jacksonville University students connected with youths from Arlington and other area schools to culminate their mentoring together and give them a taste of campus life to boot (see photo gallery below).

Meanwhile, students from five Duval County middle schools (DuPont, Arlington, JEB Stuart, Ribault and Jefferson Davis) participated in “A Day in the Life of a JU Dolphin,” a collaborative event between JU Student-Athlete Services and the 5000 Role Models of Excellence program of Duval County Public Schools.

“Every year these students do this component of my course in the right spirit — they do way more than the one hour a week required,” Grant said. “They spend the time, they go watch their mentee play sports, they get smoothies together, whatever. And you see kids’ grades go up. Then my students can compare what’s happening with these youths in real life to what we talk about in class. Our students say they gain a lot. There are things they hadn’t understood before, what some adolescents go through.”

Now in its fifth year, the service-learning aspect of Grant’s class in the College of Arts and Sciences partners her students with mentees who are part of the Communities in Schools Jacksonville dropout prevention program and may have dealt with emotional, family, legal or other troubles.

Grant’s coursework helps prepare her college students as they learn community perceptions of the criminal justice system and of those who violate the law, with special emphasis on juvenile justice and juvenile offenders. Their mentoring helps dispel common myths and stereotypes regarding youths and delinquency, and they get to have a voice in the community’s perception of juveniles.

April Lantz, a sophomore Psychology major who plans to become a school counselor or therapist, said she will never forget the one-on-one relationship she was able to build. Her mentee, 15-year-old Terry Parker student Angelica Castleberry, won’t soon, either.

“Before Miss April mentored me, I felt really alone … but then she came along and it turned my life around, and I started doing better in school,” said Castleberry, who plans on a career either in the Navy or as a therapist herself. “I felt like I had something to work for, that I had a goal. Her kindness gave me a lot of hope.”

Dane Gilbert, director of case management for Communities in Schools and a 1979 JU Physical Education graduate, has monitored the benefits of Grant’s mentoring project over the years and has seen the positive impact a caring adult can have on a student who may not otherwise be considering life goals such as attending college.

“Our students look up to college kids as very special people, and we’ve seen some of them continue on with these friendships even after the program is over. We love our partnership in Arlington with Jacksonville University, and we’re very thankful for it.”

Call it more of a crash course, but the simultaneous 5000 Role Models of Excellence event on campus partnered area sixth-graders with JU student-athletes for half of the student-athlete’s regular day, giving the youngsters a firsthand look at a Division 1 student-athlete’s day-to-day schedule.

As part of the program, student-athletes carried on with their regular activities, including going to classes, socializing with peers, eating lunch and attending practice if their team was holding it. If the student-athlete did not have practice, his middle school students were given a tour of the venue where the student-athlete practices or plays. The 5000 Role Models of Excellence students also toured the entire campus and the athletic weight room.

“You are giving them a chance to walk it, see it and touch it. Beyond what you can imagine, the fingerprint you are putting on them will last a lifetime,’’ Duval County Public Schools Assistant Superintendent Larry Roziers told the student-athletes. 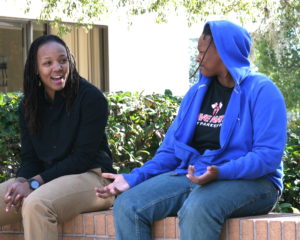 “I’ve been doing this a few years, and it’s just as exciting as it was the first time I got to do something like this,’’ said Horton, who mentors at Fort Caroline Middle School. “It’s cool to give back to Jacksonville and Arlington to make sure these guys know all of this is possible and that they get exposed to this environment, so they have something to shoot for. I hope so. The little stuff I did like this when I was their age stuck with me. Yeah, I get it.’’

JU lacrosse player E.J. Thurmond said he was honored to represent the school to the kids.

“When I was in school I had cousins who played football and whatnot and I looked to them for guidance,’’ he said. “But when I was in sixth grade, no, I never got to shadow anyone on campus, see the facilities. It’s the first time I’ve ever done anything like this, and I’m honored. We’re paying it forward.’’

The middle-schoolers were excited to be on campus but didn’t seem too sure what to expect.

“We’re here to learn more about college and universities,’’ said Jesean Armstrong, from DuPont Middle School. “I’m not sure what I’ll take from this but I might learn how difficult it is to go through college and how to deal with it. It’s really cool, it’s really big on campus.’’