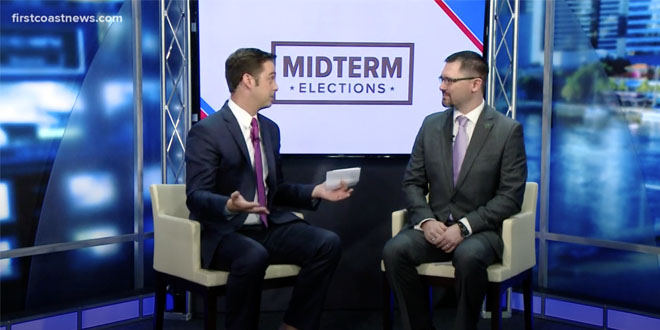 Recently published by The Washington Post, Politifact.com, and other national and local media outlets, Assistant Professor of Political Science Dr. Michael Pomante and collaborators puzzled out ease of voting from state to state. 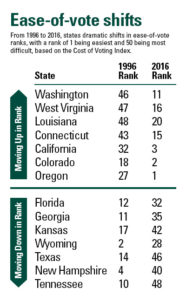 The research boils down to what Pomante and his colleagues—Dr. Scot Schraufnagel of Northern Illinois University and Dr. Quan Li of Wuhan University in China—call the “Cost of Voting Index” or COVI. Complete findings are found in the Sept. 2018 issue of Election Law Journal and online.

Using data collected from state legislation and U.S. presidential election cycles since 1996, Pomante and his colleagues considered several variables, including voter registration deadlines and restrictions, pre-registration laws, required voter identification, polling hours, and what they termed “voter inconvenience.” Indicators of inconvenience may include states with no early voting options, restrictions on absentee voting, the number of available polling stations, and even provisions for paid time off work to vote.

Pomante said he hopes these efforts will “shed light on the impact that voting policy has on how easy it is for voters to cast ballots in national elections.” Although Florida allows its citizens to take part in early voting, Pomante prefers to cast his ballot on Election Day. And he’s not alone, though a record number of Americans are taking advantage of absentee and early voting this year, with more than 31.5 million ballots already cast across the nation for the 2018 midterm elections.

Florida ranked 32nd out of all 50 U.S. states for 2016, with the top spots going to Oregon, Colorado, and California when it comes to “easy” voting.

Using principal component analysis and information on more than 30 state election laws and filtering that data through seven different issue areas, the COVI construct was created. A higher number on the COVI indicates greater difficulty for eligible or potential voters.

“We also test the construct validity of the COVI using both state-level and individual-level voter turnout. After controlling for other considerations, we find aggregate voter turnout is lower in states with higher index values and self-reported turnout also drops in states with larger index values,” researchers said. In layman’s terms, voter turnout is impacted by how difficult states make the voting process. The five states found to be most restrictive in 2016 also reflected an average dip of nine percentage points in turnout.

Can COVI predict statewide variation in voter turnout? Pomante said yes. The study states that a 10-percentage-point increase in the electoral margin for the most competitive race (whether presidential or gubernatorial) at the top of the ballot in each state in 2016, was associated with, on average, a nearly three-point decrease in voter turnout. Using this model to look at the 2018 midterm elections, Pomante said it’s reasonable to expect an average turnout in Florida because the state has two very competitive high-profile races, which will increase turnout despite more difficult voting policies.

So, what might these findings mean for state legislatures seeking to reform voter registration laws?

According to the study, states with the lowest COVI values, therefore, earning that coveted “easiest voting” status, are the same states that allow voters to register on election day, or have automatic voter registration, and forego strictly enforced photo identification. Conversely, states with higher values on the COVI—like Mississippi, Virginia, and Tennessee—generally have new voter registration cutoffs approximately 30 days prior to elections and typically lack convenient early voting options. Self-reported turnout, Pomante and colleagues report, can also be problematic.