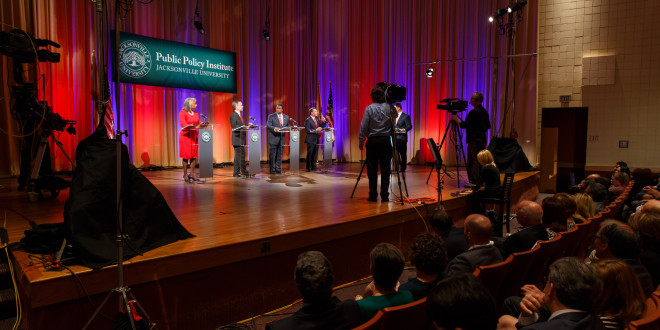 JU Public Policy Institute Director Rick Mullaney welcomes the crowd at the first round of debates at Terry Concert Hall.

Channel 4, The Local Station, and the Jacksonville University Public Policy Institute (JU PPI) will again co-host hour-long debates between the candidates for Jacksonville’s next Mayor and Sheriff, including the final debate before the May 19 election in the hotly contested Mayoral race.

Sheriff candidates Ken Jefferson and Mike Williams square off at 8 p.m. Wednesday, May 13, in Terry Concert Hall at Jacksonville University, while Mayor Alvin Brown and opponent Lenny Curry debate at 8 p.m. Thursday, May 14, in the same location.

News4JAX anchor Kent Justice will moderate the events focusing on key issues facing the community. Both debates can be seen live on WJXT Channel 4 and News4JAX.com beginning at 8 p.m.

“We’re at a crucial time in our city,” said WJXT General Manager Bob Ellis. “How each candidate will attack our challenges is critical for voters to hear. This will be the last opportunity to listen to these candidates address one another prior to the election. As only The Local Station can, we’ll get the community the real information they haven’t gotten anywhere else so they can make the best decision for Jacksonville on Election Day.”

JU PPI Director Rick Mullaney said these live televised debates are an important part of the democratic process and could help determine the outcome of the election.

“This is a unique opportunity for the voters to hear directly from the candidates, and not just from a campaign ad or spokesperson,” he said. “Elections matter, and these debates, the week before election day, could significantly affect the outcome of both races.”

Each debate is moderated by News4JAX anchor Kent Justice in front of a live studio audience.

“There are complex issues facing the city of Jacksonville. Our role in the debate will be to push for candidates’ solutions, and to explain why they may be the best choice for voters in leading Duval County over the next four years,” said Justice.