“Everything we have here in this life, in this world, has been thought about by people who dreamed, and if you dream big, you’ll accomplish everything.”

NCAA.com’s new video highlighting JU Dolphin Brian Holcomb is out, and it’s an emotional one, to say the least. 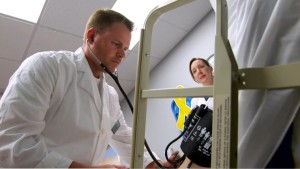 Holcomb, who in April became the oldest starter in NCAA history, last pitched a game as a senior at Mason High School in Michigan, then served 17 years in the U.S. Navy, with multiple tours overseas in places like Iraq, Afghanistan, Pakistan and Africa.

He was given a chance to make the JU baseball team after a rigorous tryout and practice.

“I was ecstatic. Inside I was like a little kid at Christmastime,” he says in the video. “But I knew I was going to earn this just like anyone else.”

The video focuses on Holcomb’s dream to start in Division One, and also on his goal through the Medical Enlisted Commissioning Program in JU’s School of Nursing to complete his Bachelor of Science in Nursing and come out an officer in the U.S. Navy Nurse Corps as well. 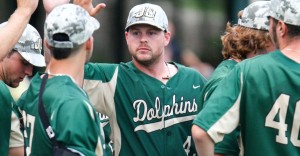 “Everybody told me I was kinda crazy trying to go through this grueling program and trying to play baseball,” Holcomb says in the video. “There’s a reason why the Jacksonville University Nursing program is one of the top in the country. It consumes you, and it’s supposed to be like that.”

Holcomb’s son Dylan, 7, saw his dad make history, and when he left the mound after starting the game, Dylan was “looking at him [Holcomb] like he was a superhero,” Coach Tim Montez tells NCAA.com.