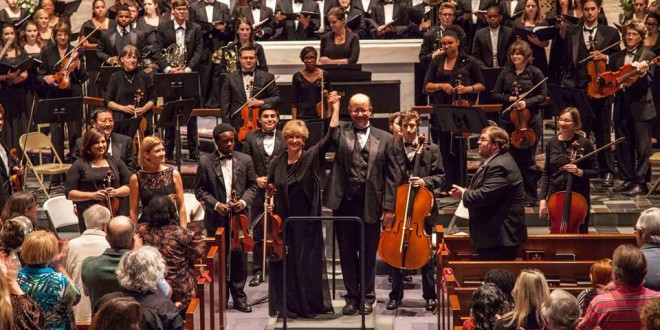 The Jacksonville University Orchestra and Chorale, under the direction of Dr. Marguerite Richardson, will present Mozart’s Requiem, on Saturday, April 18th, 2015 at 7:30 pm in Terry Concert Hall. Left unfinished at the time of his death, the Requiem is surrounded by mystery and intrigue, much of which was perpetuated by the 1984 film, Amadeus.

Although several composers have “finished” the work, the JU performance will feature the most popular completion attributed to Mozart’s friend and possible pupil, Franz Xaver Süssmayr. This marks the fourth major choral and orchestra work performed at JU since Richardson and Snyder joined the JU music faculty. Collaborations between orchestra and chorale are exciting experiences for both ensembles.

Dr. Timothy Snyder, Director of Choral Activities and chorus master for this performance, says, “Like singing Handel’s Messiah, performing Mozart’s monumental Requiem is a rite of passage for serious singers.   I was in graduate school before I sang the work with orchestra.  That we can bring this experience to our students and to the JU community is something to celebrate.”

Richardson continues, “the “classical” style of orchestral playing required for Mozart’s music is surprisingly difficult. The orchestra has performed works by Haydn and Beethoven this year in preparation for the Requiem. The process of working with the two groups separately, and then bringing them together, is inspiring.” The performance will also feature another masterwork by Mozart, the Overture to his opera, Don Giovanni. In addition to the performance on campus, the concert will be presented on Sunday evening, April 19th, at 6:00 pm at All Saints Episcopal Church on Hendricks Avenue. The concert and parking are free of charge at both venues.