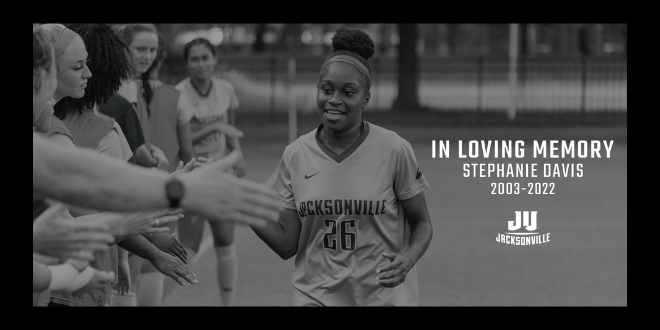 The Jacksonville University campus community is mourning the loss of Stephanie Davis, a freshman and women’s soccer student-athlete, who tragically passed away over the weekend.

“We are extraordinarily saddened to share the news of the tragic passing of Stephanie Davis on Sunday evening,” said Senior Vice President and Athletic Director Alex Ricker-Gilbert. “Stephanie’s journey at JU had only just begun, but she will be dearly missed by her family, teammates, classmates and everyone else who had the pleasure of knowing her on campus.

“We extend our deepest condolences to Stephanie’s family, and ask that you keep them, and the team, in your thoughts and prayers.”

Davis was killed in a car accident involving several members of the women’s soccer team. Some of Davis’ teammates in the vehicle were injured but are recovering.

The team was returning to Jacksonville from an out-of-town trip they had organized together.

“Stephanie was a fantastic girl, well-mannered, hardworking and fun to be around. She just seemed to enjoy life and being a part of our soccer program,” said Head Coach John Constable. “She was always smiling with her big bright smile.

“Everyone connected with our women’s soccer program will miss her greatly.”

Davis competed this past fall for the Dolphins, starting two of the 11 games she appeared in. She started the home opener, playing all 90 minutes against South Carolina State on Aug. 31, 2021. She logged double-digit minutes six times throughout the season, helping the team to a seven-win season, the program’s most victories in seven seasons.

She was a standout multi-sport athlete at Tohopekaliga High School in Orlando. A prolific goal scorer at the forward position, she earned First Team All-Orange Belt Conference honors after her senior season. She also shined on the track, competing in the 100m, 4x100m and 4x400m events.

Off the field, Davis was a hard-working student, who was on track to join JU’s prestigious nursing program. Prior to starting at JU, Davis completed several dual-enrollment courses, balancing a rigorous course load with the challenges of being a student-athlete.

“News that a promising young life has been cut short is heartbreaking to hear,” said Jacksonville University President Tim Cost. “Stephanie was a bright, talented young woman who was dearly loved by her teammates, coaches and professors here at Jacksonville University. As a university, we are focused on supporting her family and everyone who knew Stephanie, as we collectively mourn her loss.”