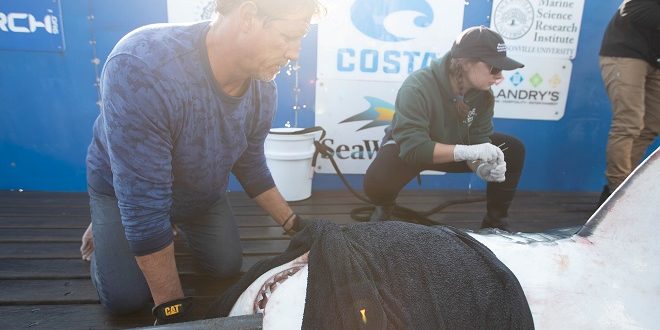 Now, in its tenth year, the world-renown ocean research organization OCEARCH has completed a cumulative 33 expeditions, collaborated with a total 174 scientists, facilitated the capture and release of more than 300 sharks, and has been the subject of countless online narratives, news columns, student journals, and magazine articles.

An Explorer in Residence

Fischer, who established OCEARCH in 2007, helped bring about the thriving partnership and ongoing collaboration with the University. He told guests at today’s luncheon that OCEARCH, as a great-grandchildren-first organization, belongs with Jacksonville University because it is a great-grandchildren-first institution. He serves as the University’s Explorer in Residence and recently came ashore after the completion of OCEARCH’s inaugural Canadian expedition, 2018 Nova Scotia, from Sept. 18 to Oct. 12.

JU marine science student Christina LoBuglio and leading shark researcher Assistant Professor of Biology and Marine Science Dr. Bryan Franks both worked aboard the M/V OCEARCH during its most recent journey to Nova Scotia. Fischer called Franks “a beast in the water,” much to the students’ and Franks’ amusement.

Addressing students early Tuesday morning, Fischer said, “We aren’t ‘shark people.’ We’re abundance people.” Addressing data deficits and seeking maximum life at every level of the global food chain has been a top priority for Fischer and his team. “The path toward abundance starts with our larger shark species,” he said, based on their role as apex predators.

Lydia, a 14-feet long female Great White, first brought Fischer and OCEARCH to Jacksonville in 2013. Local police received a call from Fischer warning them about the shark’s presence immediately off the coastline. Lydia was tagged in the mouth of the St. Johns River and is credited for the dynamic history between the city of Jacksonville and the iconic shark trackers.

The Nova Scotia expedition focused on shark movement and behavior in the Atlantic with data from sharks like Lydia as the catalyst. OCEARCH wanted to compare findings from the Pacific and determine why mature Great Whites repeatedly bypassed Cape Cod and headed further north to Newfoundland. Their studies centered around the Bay of Fundy, Lunenburg, Cross Island, Mahone Bay, and Ironbound Island.

“Getting the first one is always a miracle,” Fischer said, explaining how the research vessel operates from dawn until dark and how tenacity is key. On average, expeditions last 25 days in hopes that 50 percent of those days have workable weather conditions.

On day three, their first shark was captured, tagged, and released—a mature male Great White proudly named Nova. “The big struggle in the North Atlantic has been capturing mature male White sharks.” However, that trend ended in Nova Scotia with a total of seven sharks tagged, including five males.

Following the multi-year migratory tracks of Lydia, Hilton, and George—all Great White sharks—the team researched the possibility of a potential mating site in the North Atlantic. Identifying the mating site, according to OCEARCH, is crucial with sharks in the role of balance keepers. They act as key indicators of overall ocean health.

Florida’s First Coast and Jacksonville have now been solidified as a shared foraging center for migrating sharks in the Atlantic, with fish stocks of Red Snapper, Black Drum, and bait runs plentiful in surrounding waters. Fischer told lecture attendees the Atlantic patterns that have emerged up to this point indicate more similarities between patterns of the coast of South Africa than the Pacific. He also said, “Never in a million years did I think we’d be here today, building a future for our oceans together.”

Fischer received the same award granted to Titanic explorer Bob Ballard in 2017. JU President Tim Cost said, “This is about people who break ceilings are willing to innovate, and we couldn’t have selected a better pioneer this year than Chris Fischer.”

At 48, Fischer said he is a product of the Jacques-Yves Cousteau generation, and when his hero’s contributions to oceans-first filmography ended in 1997, there was an undeniable void. “It felt like people were disconnected from the ocean.” It wasn’t long after that Fischer took serious notice of the number of sharks being killed daily and the dire effect such practices had on the world’s oceans and food supply.

In 2007, he wanted to know if the practical and the academic could be brought together in a common mission and with a selfless disposition. By 2012, he said, “Our time in television had passed and we went mobile,” and the open-sourcing model truly took shape. “We’re going to all rise with the tide.” The mission then became how to give the ‘product’ away, to open-source everything, involving everyone from the classroom to the boardroom, and to create an effective voice for the world’s oceans today.

The re-energized definition of exploration, to Fischer’s mind, is the disruption of traditional research models, something he shares with enthusiasm, along with jokes about fish sandwiches. The OCEARCH founder, along with teams of scientists and seasoned fishermen, have brought shark tagging into a new era. Sharks tagged over the past 10 years each carry anywhere between $3,000 and $10,000 worth of tracking gear.

And the data is rolling in.

What lies ahead for the University, Jacksonville, and OCEARCH includes a collaboration with the City of Jacksonville to reshape and reimagine current berthing facilities in Mayport as a homeport for the M/V OCEARCH. Future expeditions, Fischer said, will likely include another Atlantic-Southeastern Seaboard run, a collaboration with the Georgia Aquarium to study Tiger Sharks, and another autumn run to Newfoundland. Dr. Quinton White, Executive Director of JU’s Marine Science Research Institute, and Provost, Dr. Christine Sapienza, continue to match the OCEARCH pace and facilitate student opportunities, academic connections, and multi-disciplinary collaborations.

As Fischer concluded his remarks at Jacksonville University, moments before he received the annual Pioneer recognition, he issued a challenge: “We live in a world that’s changing fast, and he or she who explores will finish best.”