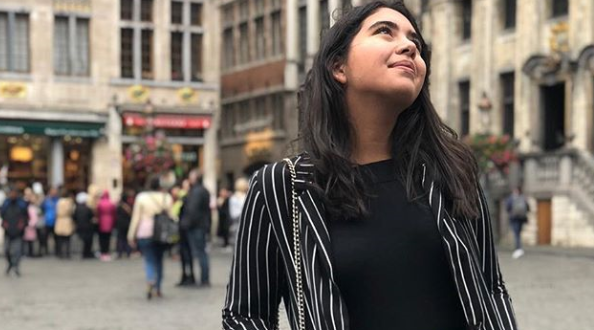 Born and raised in Brazil, Emilia Santana moved to the U.S. at age 15. Today, she is a junior at Jacksonville University (JU), double majoring in political science and French.

“One of the things that most influenced my choice to study political science was experiencing the visa process—from vacationing in the U.S. as a child to later moving here, and eventually turning 18 and wanting to stay for college.”

She worked hard to earn high scores and dreamed of one day working in a Consulate or Embassy. For Brazilians, visa renewal is required every four years. For some students, it can be required as frequently as every six months. JU staff members, Emilia says, were integral to making that process as smooth as possible and seeing it through to completion. That personal attention and know-how combined with the academic scholarship the University offered further confirmed her choice.

JU became her new home away from home. And home is nearly 4,000 miles away.

She has not been home to Brazil since starting JU three years ago. “I miss my own culture sometimes. I definitely miss the food,” she laughs. Brigadeiro, a sweet treat made of cocoa powder, and acai bowls are among her favorites. “But I also miss the people. Everyone is so warm and friendly.”

Coming from South America, she says, everything was different. She had to learn the culture and pick up on so many details, from personal space to greeting people with a smile instead of a kiss. “Americans smile a lot—walking down the street or to strangers—but in Brazil, they don’t do that. For them, smiling is an intimate behavior.”

When she first arrived at JU, she told her advisor about her interest in working with Consulates. “He said the first thing to do was Study Abroad.”

Since her freshman year, Emilia worked to arrange classes in such a way that fall semester of her junior year left some margin for an experience abroad. “I applied during sophomore year, and because I’m an international student, there were many small but important steps to follow.”

When it came time to secure a student visa she moved efficiently through all requirements. August 29, 2018, Emilia left for Aix en Provence in the South of France and did not return until January 3. During those four months, she explored Belgium, Denmark, Sweden, Morocco, England, and Switzerland.

“When I first arrived in France, I knew that I wanted to get involved in the community,” Emilia said. She was already living with a host family but wanted to become fully immersed in the culture. “When my school offered an organization fair with clubs to join from around the city, I signed up.”

The Culture Exchange is an after-school program sponsored by the French government and was one of the opportunities Emilia discovered at the organization fair. “I applied to City Hall right away.”

The Exchange involved teaching younger children about diverse cultures and offering them a new perspective by hearing from someone from another country. “Basically, the program goal is to provide more than one side of a narrative. The oldest student in my group was only six years old. They’re little, so you have to make it interesting. Some of these children may never have a chance to leave France, so they join the Exchange.”

When Emilia’s opportunity to talk with the children finally arrived, she began by explaining both the Brazilian and U.S. flags, what the colors and designs symbolize, and how they differ from other nation’s flags. She colored with the children and talked history, language, daily life, and holiday traditions.

Emilia wasn’t fluent when she arrived but had to function without the aid of a translator. “Before I left France, I thanked my host family and told them how they’d helped me far more than I helped them.”

During her time in France—beyond taking classes and The Culture Exchange—Emilia volunteered at QX1. Based in Marseilles, the program involves interviewing and assisting immigrant children and families.

“Most often, they don’t know their rights, struggle with the language, and have to be extensively interviewed.” Those interviews must also be transcribed into English. “That’s where I helped,” she said. “The immigrants come from many places, but at that time, most were from Syria.”

For her work, Emilia received a Diplôme d’Honneur from the Mayor of Aix-en-Provence, Maryse Joissains.

Tamara Bentley Caudill, Assistant Professor of French and International Studies Coordinator and World Languages could not contain her pride upon learning of her student’s success abroad and readily shares what she calls “the amazing story of Emilia Santana.”

As part of Emilia’s coursework while in France, she took an international relations class taught by former U.S. diplomat, Philip Breeden. At the end of the semester, the class took a trip to Geneva, Switzerland, and toured the United Nations (UN), the World Trade Organization, the Red Cross, and the U.S. Mission in Geneva.

“It was overwhelming. While there, we got to watch sessions dealing with Iran and human rights. This is really what I want to do. It was amazing and inspiring. As I sat there, taking in everything, I realized that I was seeing exactly what we’ve studied.”

She says the UN has constantly resurfaced in classroom discussion during her poli-sci coursework. “But we haven’t really talked about their motivation. Why do they do what they do? They aren’t fighting all the time like we’re sometimes inclined to believe. They want solutions and to get the job done. I think the media fails to capture both sides of the story because I saw them cooperating with each other, talking, and sharing.”

In addition to her required course work and study abroad travels, Emilia made time for a side trip to Brussels. The “capital” of Europe and home to the European Union (EU) Parliament was high on her travel priority list because Brexit came up often in class. “Our final project asked how to solve Brexit. My answer included the UK remaining in the Union.”

After taking a class at JU on the Muslim Presence in Europe, Emilia became interested in Muslim culture. “I’d always wanted to visit Morocco. It was close enough to France that I could take a three-day trip with a friend to Morocco and Marrakech.” And so she did.

“Because I wished to live deliberately…”

Though her semester officially ended mid-December, Emilia seized the chance to spend her winter holiday with a close friend in England. “It was on my bucket list,” she said, a list that’s significantly shorter after her study abroad experiences.

“Never let a politician, or a man, tell you that you’re not strong enough for the job.”

Emilia names many people and experiences that have inspired her educational journey with JU, including Gwen Graham. “I had the opportunity to meet her in 2016 at a Jacksonville University Public Policy Institute Board Meeting. She told me something I carry with me everyday: “Never let a politician, or a man, tell you that you’re not strong enough for the job.”

After graduation in Spring 2020, Emilia plans to work at establishing her career before enrolling in graduate school. She also hopes to intern this summer either with the Brazilian Consulate or the French Consulate in Miami.

“My Dad works in the Brazilian government’s education department, so I grew up familiar with policy talk and how things happen. Now, I want to leave a mark and make a difference, even if it’s small. People will always remember how you made them feel.”

The full quote by Henry David Thoreau: “I went to the woods because I wished to live deliberately, to front only the essential facts of life, and see if I could not learn what it had to teach, and not, when I came to die, discover that I had not lived.”