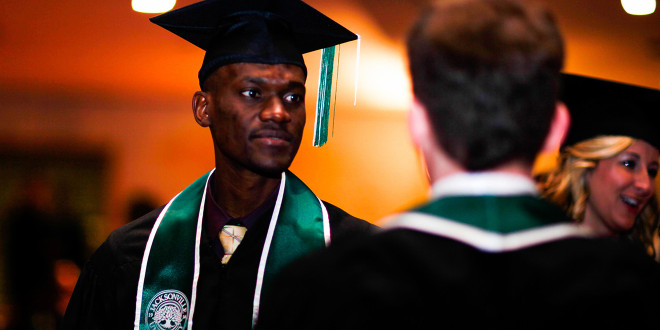 JU holds one of its largest Fall Commencement ceremonies

Jacksonville University bestowed degrees on nearly 400 graduates this past December in the first Fall Commencement presided over by JU President Tim Cost. Dr. Tracy Connors, a retired Navy captain who attended JU from 1957 to 1959 and holds a Ph.D. in Human Services Management from Capella University, accepted an honorary degree of Associate of Arts, along with an Honorary Doctorate in Leadership Excellence. For his keynote, he drew from a survey of online comments about their learning experiences offered by the JU graduates themselves, among them:

The Fred B. Noble Award for outstanding scholarship was given to Sarah Mecklenburg, originally from Germany; Matthew D. Smith of Warren, Ohio; and Zachary Taylor Greenwald of Palm Coast. The award, given to the graduating seniors with the highest grade point average, is named for the late Fred B. Noble, who earned a JU bachelor’s degree at age 91 and was a founder of the University. All three of this year’s winners maintained 4.0 grade point averages.