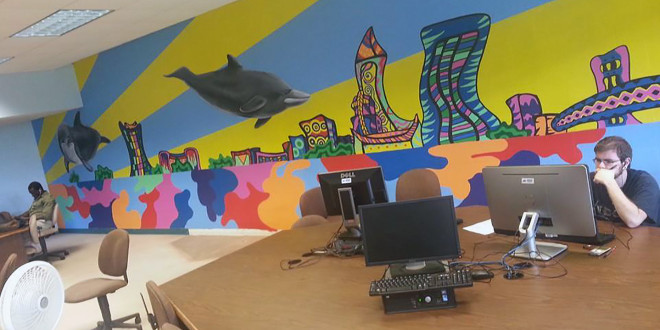 Recent JU grad Arelis Resto, 22, has left indelible images across campus for students, faculty, staff and visitors to enjoy for years to come.

Resto, who graduated May 3, 2014, with bachelors’ degrees in Illustration and English, painted three murals on campus in just the past year alone.

The first is on the second floor of the JU Marine Science Research Institute, done at the request of Dr. Jeremy Stalker, who had received replicas of fossil bones from a Mosasaur (a pre-historic fish). He wanted the rest of the bones to be painted to scale. The mural is composed of two parts and is a whopping 36-plus feet long.

The second mural is in the Admissions Office in the Howard Building. The concept was developed from Chief Admissions Officer Marisol Preston’s idea — a mosaic representation of a dolphin signifying various factors related to the student experience at JU.

The third mural, and the largest of all, is in the Tutoring Center on the third floor of the Swisher Library. The concept was entirely conceived by Resto, thanks to the sponsorship of Jody Kamens, interim director of Academic Engagement in the Learning Resource Center. It is called “Trip to Jax.” The only specifications from Kamens were, “We want a pop of color, and a UFO.” The mural is a psychedelic representation of Jacksonville from the river. In fact, its horizon is designed to match at eye level the true horizon scenery seen from the library’s beautiful window view.

Resto was active in other pursuits at the university as well. She served as Assistant Editor of The Aquarian, JU’s literary and art magazine; worked as a tutor in the Writing Center; presented her senior art thesis in 2013 at the National Conference of Undergraduate Research in Wisconsin; and published an art piece in “Mixed Fruit,” an indie magazine in New York. In addition, her art thesis was published in the JRAD: Journal Resources Across Disciplines, thanks to JU English Prof. Edward McCourt’s submission.

She isn’t resting now that’s she’s graduated, however: According to proud mom Rosa Gyuris, who many know as the friendly, always-smiling receptionist for the Office of Admissions in the Howard Building, Arelis is hoping to gain further artistic experience this year before moving on to attain a master’ degree in Fine Arts next year.