Home » All Sections » “Everything we do, we do together” – A time to grow bonds for football team at Camp Blanding 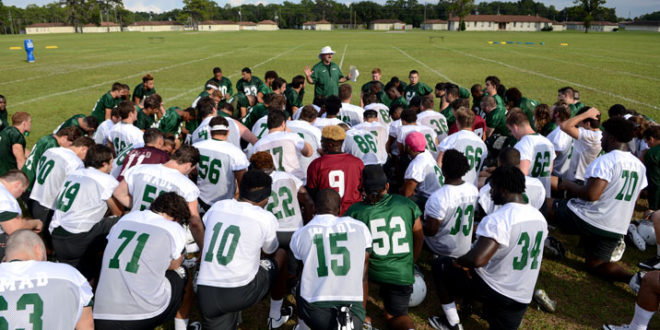  “As the guy who, ultimately, had the chance to bring in Coach Shields, I’ll tell you it was an honor.” ~ Pres. Tim Cost

“Everything we do, we do together” – A time to grow bonds for football team at Camp Blanding

Summer training for college football can look like a lot of different things. With 50 incoming team members, all new to the JU Dolphins, this year’s camp needed to accomplish many things—getting to know the player on your right and left, learning the coaching style of Ian Shields, strategizing for the coming season, and conditioning. Always conditioning.

Now that the season is in full swing with the team focusing on Drake for this weekend’s “Coming Home” celebration, camp week is a distant but constant reminder of what it means to represent Jacksonville University on the field.

“We succeed together. We fail together. But everything we do, we do together,” said Alex Ricker-Gilbert, JU Athletics Director.

Coach Shields wasn’t the only leader motivating players this past summer. Ricker-Gilbert, President Tim Cost and a line-up of impressive guest speakers joined the nearly 100 players at the Camp Blanding (CB) Joint Training Center located on the shores of Kingsley Lake in Clay County.

Shields’ West Point experience would come into play as retired Brig. Gen. Mike Fleming and Camp Blanding post commander, Col. Matt Johnson, arranged a place to get away and train. The day before camp officially began, players reported on campus to begin preparations, having no idea they’d soon board a bus and drive 40 miles southwest of Jacksonville.

Amid 70 live fire ranges, 62 landing zones, two lakes (Kingsley and Lowry) used for water-borne training battalions, seemingly endless rows of barracks, an on-site museum and a total 73,000 acres dedicated to year-round training for tens of thousands of National Guardsmen, as well as active Army personnel and Reservists, the JU Dolphins took to the practice field.

Ricker-Gilbert introduced President Cost that first evening as “no stranger to JU Athletics” and touted Cost’s baseball record as one of the top 10 winningest JU pitchers of all time, telling of his first NCAA appearance pitching a nine-inning no-hitter, the only in JU history.

“Tonight, an hour and a half drive away,” Cost addressed players at the end of that first day, “it’s worth it to come see you in a moment when you’re building a team—a culture.”

Cost, Shields and Ricker-Gilbert all challenged the 45 returning and 50 incoming players to be ambassadors of JU. Not only were they told that “team” meant “family,” but also, as Cost said, “Culture matters. It’s that collective set of beliefs. Things we live by, the things we care about, our hopes, our dreams, our priorities.”

The heat was blistering in early August as the 19th team in JU football history prepped, and practices started early and went long. Players also got a daily taste of LRC, Leadership Reaction Courses, located all over CB, to push smaller groups of players toward problem-solving and team reliance. And at the close of each sunny day were inspiring words from VIP guests, including Lt. Gen. Franklin L. “Buster” Hagenbeck of UF’s Leadership Institute, Col. Mike Canzoneri of Florida National Guard and Lee Rubin, former Penn State football team captain.

“If you don’t build a bond with your team, then why are you playing?” asks Assistant Coach Trent Steelman of players. He also recently joined JU and calls uon his time with Shields and playing for Army at West Point when coaching JU Dolphins. “That’s what really drew me to this University,” Steelman says. “Anything I do, I demand a lot out of myself, and the University demands a lot out of these kids.”

As Coach Shields often says, “It doesn’t happen by hoping,” a true motivation during the relentless summer training schedule.

It was a fitting place to make high demands. During the World War II, approximately 800,000 troops passed through CB on their way to make history and serve our great nation. In fact, CB Joint Training Center was often referred to as the fourth-largest city in Florida in the 1940s.

“People just don’t know what we have here,” says Col. Johnson. He’s a history buff and has a deep connection and admiration for CB, having personally trained, visited or commanded there for roughly 30 years. “They sweated it out,” he says of WWII troops. “They formed bonds that were inseparable and they went overseas and defeated tyranny.”

Not all residents of Duval County and beyond are aware of the inextricable link between JU and the military. With the longest standing Naval ROTC in the region, since 1971, and one of the largest in the nation, JU has always been an avid supporter of men and women in uniform. In fact, the University proudly participates in the Yellow Ribbon Program, covering tuition costs under the Post 9/11 GI Bill for active duty, reservists, veterans and their dependents. And CB is one of several major military installations in the greater Jacksonville area, making service, sacrifice and excellence something that runs through the veins of both the city and the University.

“I’m going to tell you a war story because that’s what old guys do,” Ret. Lt. Gen. “Buster” Hagenbeck told players on their last night at camp. And he did exactly that—stories about how to persevere when things go badly and very real narratives detailing some of the darkest moments in America’s recent history.

“I’m gonna give you the bottom line up front,” said Hagenbeck. “It’s not about you. It’s about the team.”

For Steelman, and players Michon Sobers, Trip Chauret and Emon Smith, taking one for the team is not a new concept. All grew up in military families and service ingrained in them from the start.

Both of freshman Michon Sobers’ parents are Army. He was born at Ft. Hood in Texas; his mother is Pentagon-based Lt. Col. Toy Sobers and his dad, Ret. Lt. Col. Art Sobers, former air defender and West Point grad.

Trip Chauret, recently returned from Guam where he spent his high school years, is the son of Lt. Col. Keith Chauret II, Air Force special-ops pilot. A freshman defensive back, Trip is a biology major at JU interested in a possible career in orthopedic surgery and already a Certified Nursing Assistant. Trip is quick to say that adaptability, commitment and hard work are values held dear in his family, something he hopes to transfer into team life at JU.

Junior Emon Smith is already a member of JU’s Naval ROTC and studying aviation. His father, retired Navy pilot Evin Smith, died of Lou Gehrig’s Disease when Emon was only 7, but that passion for aviation lives on in both Emon and his older brother who is currently stationed here in Jacksonville. Emon knows his way around a carrier, cruiser, destroyer and submarine, as well as the football field.

Steelman’s uncle, Tom, served in the U.S. Army during the Gulf War as a non-commissioned officer, a position Steelman says is the “backbone of the Army.” But the Steelman legacy of service and leadership doesn’t stop there. His great-uncle, Peter Roberts, served as U.S. Counselor General to Venezuela during the Nixon administration and as an interpreter at the Nuremberg Trials during World War II.

“It’s an honor to serve this great nation,” Steelman says, still a Reservist. “And I have the utmost respect for those who willingly sign up to do so.”

Out of about 4,000 JU students, a quarter of them are student-athletes, the highest percentage for any Division 1 university in the nation. President Cost leveled with players from the very beginning and offered a statement that sums up the 2016 Camp Blanding experience: “You can set, and will set, the culture of the University.”

For the 2016 team schedule, roster, results, news and more, check out JU Athletics, and for more details about JU’s support of military and veteran students, click here.