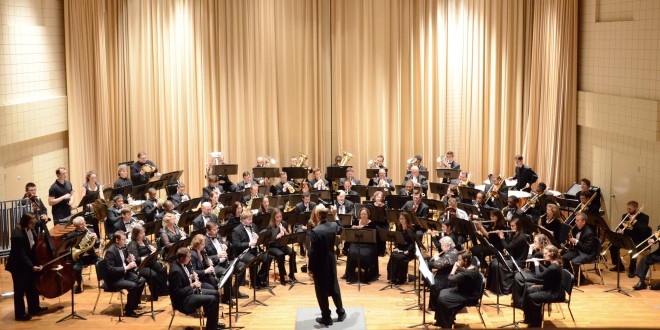 The Jacksonville University Music Department will present the JU Wind Ensemble and the First Coast Wind Ensemble in a partner concert at 7:30 p.m. Thursday, Oct. 9, in Terry Concert Hall on the JU campus at 2800 University Blvd. N. The concert is free to the public.

This event is the opening concert of the 25th anniversary season of the First Coast Wind Ensemble, a 60-member community music organization led by conductor Artie Clifton, a member of the JU music faculty. The group provides a cultural service to the Jacksonville community by offering free concerts of quality wind music.

The program will feature guest composer Ralph Ford conducting his own music. In addition to his 29 years of university teaching experience, Ford has enjoyed a wide variety of professional experiences in the music, media, and broadcast industries. He is an exclusive composer and arranger for Alfred Publishing Co. in Los Angeles, with more than 250 titles available worldwide for orchestra, concert band, jazz ensemble and marching band. A frequently commissioned composer, his music has been premiered and performed by university, military, professional, community and school ensembles around the world. He has received international and regional awards for his jingles and 3‐D animation. In addition to his usual production schedule, Ford is also in demand as a conductor, clinician, adjudicator, and guest lecturer throughout the United States and abroad.

The concert finale will feature the combined forces of the First Coast Wind Ensemble and the Jacksonville University Wind Ensemble in a powerful performance of H. Owen Reed’s popular and exciting “La Fiesta Mexicana” folksong symphony.

The JU Wind Ensemble consists of the Music Department’s best woodwind, brass and percussion players, who study both traditional and contemporary wind band literature. The First Coast Wind Ensemble has released two recent albums to wide acclaim: A Christmas Celebration and Symphonic Spirit, and a DVD titled Sounds of the First Coast.