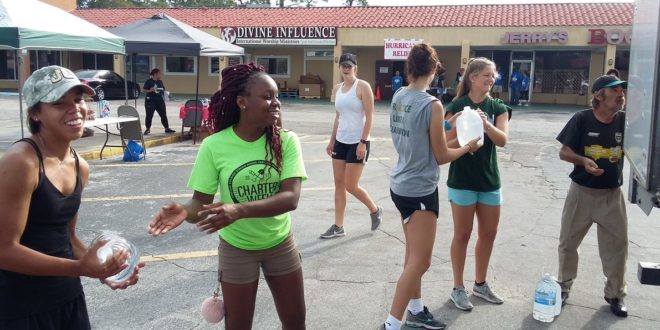 Most people wouldn’t stare Hurricane Irma’s wake of destruction in the face and see it as an opportunity, but that’s just how the Jacksonville University family saw it: a chance to give back to the Arlington community and accentuate common ground among all the area’s residents.

Students, alumni, faculty and staff fanned out across the region with volunteerism on their minds and giving in their hearts after Irma’s fierce Sept. 10-11 storm surge, high winds and torrential rainfall.

“As a University community, our thoughts and prayers are with those whose homes and businesses felt the full effect of this devastating storm,” President Tim Cost said in his message titled “The JU Spirit” to the campus community.

Here is just some of the community outreach the JU family was able to offer, even as it worked to put its own house in order after the hurricane:

“I think the actions of Jacksonville University students and staff in the wake of Hurricane Irma are direct reflections of what lies at the foundation of our institution and makes it so special: family,” said Clayton Levins `14, Community Relations Coordinator in the JU Center for Community Engagement. “I had the privilege to speak to a crowd of Arlington residents at Town and Country shopping center with Councilwoman Joyce Morgan. I will not forget the looks of delight from these hurting people when they heard that they, too, were members of this JU Dolphin family. It was a truly uplifting experience for each of us to know that we were in this together.”

JU defensive back Emon Smith, who helped deliver food items to Arlington Community Services, told WJXT TV-4 that the devastation hit home because he has family members who lost everything during hurricanes Katrina and Irma.

Deborah Woods, executive director of Arlington Community Services, called it a “no-brainer” to accept JU’s offer of a food donation.

“And the players got out as well as some of the staff over there, and it was just wonderful,” she told the TV station. “I mean, my guys didn’t have to do a whole lot because those boys took care of it.”

Quoc Mai, a member of Christ the King Catholic Church on Arlington Road, sent a special thank-you note to the University after getting unsolicited aid from Men’s Soccer players and coaches while he tried to clean up around the property.

“I found out our church was still a mess from the storm … We saw so much work, and it was just me and the two little ones. We worked… worked… hot… sweat. I wanted to give up,” he wrote. “I needed a miracle, and a miracle came in the form of the entire Men’s Soccer Team from Jacksonville University! Can you believe it? … They just came and helped without me asking! Thanks to God and the Jacksonville University men’s soccer team. May God bless all of them!”

“We developed a relationship with L’Arche Jacksonville through JU Charter Day of Service last April, and we offered to help with heir hurricane cleanup,” he said. “Our guys were fantastic in their effort and continue to foster the growth in our relationship within the Arlington community.”