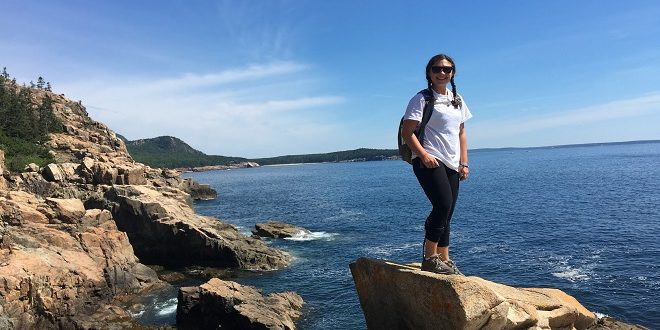 JU Dolphin in the Land of Bluenoses: Reliving Nova Scotia

Christina LoBuglio, Graduate Assistant at the Jacksonville University (JU) Marine Science Research Institute (MSRI) joined OCEARCH for its 33rd expedition, a first in Nova Scotia for her and the entire team.

“You hear celebrities say all the time that what you see on screen or in a magazine isn’t real life, and I get that. But honestly, I got so accustomed to the M/V OCEARCH for those 10 days, it was hard to remember that it wasn’t my everyday life. It’s definitely surreal being out on a ship fishing for Great White sharks,” Christina says. “Standing next to a 13-ft. Great White doesn’t sound like real life.” 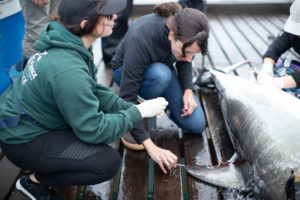 With the exception of their Gulf Stream 2018 exploration, she’s been involved in every OCEARCH expedition for the past 30 months. “In the Gulf Stream expedition, they were working way offshore and no daytrippers were allowed.” Nova Scotia 2018 was her first experience living onboard. “I already knew the ship and the crew, most of the scientists, but staying onboard for ten straight days is a whole new world.”

She describes two main guest bunks below deck, each sleeping eight people and both near the engine room. These are co-ed quarters with photographers, graduate students, and scientists all sharing space. “We woke up around 6:30 every morning and breakfast is served at 7:30,” Christina says and gives kudos to “Chef Tim” who stocks provisions beforehand, planning each meal for the entire expedition. “There are always a lot of leftovers and a big snack room.”

“It’s definitely surreal being out on a ship fishing for Great White sharks. Standing next to a 13-ft. Great White doesn’t sound like real life.”

Her professor, mentor, and fellow researcher aboard the M/V OCEARCH, Dr. Bryan Franks worked onboard for the first seven days of the Nova Scotia expedition. The day he left was the day she arrived. OCEARCH Founder Chris Fischer, Harley Newton, V.M.D. from the New York Aquarium, and Bob Hueter, Ph.D. from the Mote Marine Lab were also aboard.

Beyond his work on the ship, Dr. Newton also serves on Christina’s graduate thesis committee. Dr. Christine Bedore, another scientist aboard, is specifically studying the eye and vision capabilities of Great White sharks. Christina assisted with measurements for Bedore’s research and remembered her from the 2018 OCEARCH Symposium at JU where Bedore’s initial findings were presented to students.

The combined team spends the majority of each day chumming, or more simply, waiting for a shark. All scientists, Christina included, remain on the mothership while Capt. Brett McBride and other crew members take the smaller fishing boat into surrounding waters. “The second you hear over the radio that a shark is on the line, everybody comes together and prepares,” she says. “Whether you’re on the science team, the crew, or the media team, you’re moving, with all of us working together.”

The excitement typically starts with Chewy.

Chewy, the OCEARCH seal decoy, is constructed of dark gray carpet and weathered pool noodles attached to a rod and reel. Christina says he is an important part of the chumming and fishing process. Floating on the surface of the water off the stern, Chewy tempts sharks to latch on, which often leads to a successful catch.

M/V OCEARCH is outfitted with a 75,000 pound-capacity hydraulic platform designed to safely lift marine animals out of the ocean, which rests on the main deck of the ship when not in use. “When a shark is on the hand line, basically, Capt. Brett leads the shark toward the lift like training a puppy in a very short period of time.”

The moment a shark is on the line, the platform is raised up and over the starboard side and then slowly lowered into the water. “While that lift is in the water, the only person down there is Capt. Brett,” she says. He’s the one risking life and limb, along with two media team members situated off to the sides and capturing the entire experience.

As the lift is raised, seawater leaks away and a small gap remains for everyone else to step over and onto the lift. “Immediately adrenaline kicks in and you get to work,” Christina says.

The first phase involves the shark on its side with its dorsal fin touching the platform.

“Even though it’s a large animal, the shark accepts what’s happening,” she says. However, aggressiveness always depends on the individual shark. For this reason, a dark wet towel is immediately placed over the shark’s eyes. Then a hose is placed in the mouth to provide a constant flow of seawater over its gills. “So, the shark has the oxygen that’s needed and not deprived of any necessities. From that point, our work up begins.”

The first shark caught during the Nova Scotia expedition was named Hal—a mature male. Christina, who stands only five feet tall, says, “I was a little nervous because I’d never been around a shark bigger than me. Though I’ve been around Great White sharks many times, they’ve all been juveniles and roughly my size or smaller.” 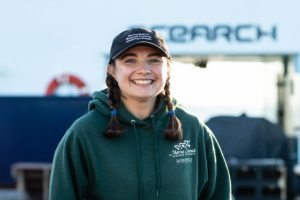 She gave herself a silent pep talk and focused on her job: to locate parasites and take microbial swabs. “I told myself, ‘All you’re going to do is stand next to a huge shark and rub it with a big Q-Tip. It’ll be fine.”

The swab, she says, happens first to ensure the least contamination of human hands possible. “On Hal, I swabbed three different regions: near the caudal fin in an area called the cloaca, around the gills, and by the dorsal fin. Anywhere I see a parasite, I go and get it. That includes the shark’s mouth, but Capt. Brett was there helping me out.”

In addition to microbial swabs, Christina also performed red muscle biopsies and was a part of collecting and analyzing semen samples, a critical group of data for OCEARCH’s mission to uncover mating and migratory patterns. Samples collected were later sent to multiple scientists, including a doctoral candidate performing research on the effects of heavy metal contaminants on muscle tissue.

Shorty, the second shark caught, was Christina’s first live biopsy specimen. “I kept worrying about what the shark would do and whether it would twitch.” She also says that OCEARCH photographers were everywhere. “From the time we were up at breakfast or working up a shark, to the time we were pulling brigs and calling it a day, the cameras were everywhere.” Maintaining a laser-like focus and practicing persistence, she says, is critical in fieldwork.

In the aftermath of a successful work-up and tagging, Christina experienced an adrenaline crash and remembers needing a hug. The science quickly followed. Samples were prepared for the freezer in the “tackle bar” or at-sea laboratory. “Meanwhile,” she says, “the fishing crew is already back out there.”

“Afterward, it’s like a big, family get-together where everyone is celebrating, hugging, and congratulating each other. You’re saying, ‘Oh my God! That was the greatest thing I’ve ever done!'”

Though Christina lost ten days of graduate classes to join the expedition, she says it was well worth the extra classwork and all the catching up. “My professors kept reminding me that I would learn more over that short period of time than I could imagine. It’s the ultimate hands-on experience. I mean, anyone can read a textbook and understand the steps for how to take a muscle biopsy, but actually being there and doing it is totally different.”