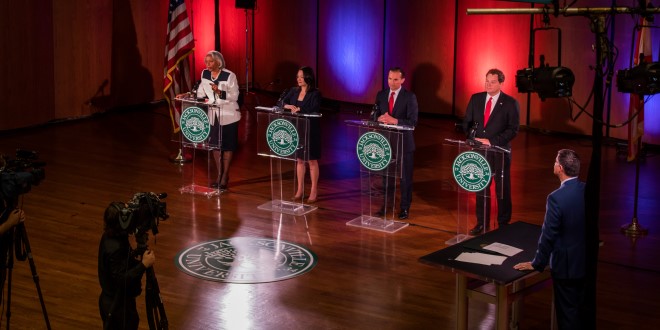 Four candidates in the Jacksonville race for mayor stepped onto the Terry Concert Hall stage Wednesday night and into the homes of Duval County residents for a live, hour-long debate broadcast. Jacksonville University (JU) was proud to co-host the televised event, the only one of its kind this election season.

“The position of mayor carries significant weight and influence on the future of Jacksonville and the entire First Coast,” said Rick Mullaney, director of the Institute. “To make informed decisions at the polls, it’s critical for citizens to hear directly from the candidates, and the Institute is proud to help bring this debate directly to households across Jacksonville.”

Nearly 400 debate guests, who would make up the live audience, passed by dozens of off-duty police officers as they entered the venue. Chants of “Four more years!” – rebutted by calls for “No more tears!” – rang through the air. Inside, empty seats were hard to find.

Debate questions focused on the most pressing issues in North Florida—crime and public safety, fiscal priorities, education, transparency—as well as the divisive topics of the sale of JEA and the future of The Landing.

Each candidate offered opening statements, randomly ordered by the drawing of lots. Curry said, “Together we saw the pension crisis resolved that had long-plagued our city and I’m asking for four more years.”

Allen spoke of battling crime with more economic development, while Hill took the opportunity to introduce himself to voters as a first responder, local businessman, and “the boat show guy.”

Brosche began by leveling a direct criticism of the current administration. “This mayor has put a privileged few over the people,” she said, and the tug of war between Curry and Brosche continued throughout the debate.

Landing on the Issues

The issue of violent crime was a recurring theme throughout the debate, as the candidates offered their ideas on how to improve public safety downtown and throughout the city.

“What isn’t happening is the engagement of all community groups—those that have never been approached by the Mayor or the City Council,” Hill said, adding that Jacksonville needs a better support system for individuals on parole to combat recidivism.

Allen agreed and stated her commitment to “community policing” aimed at restoring trust between law enforcement and citizens. “People should feel safe in their homes,” Allen said.

Brosche focused on prevention measures such as investing in children’s services, rather than adding more officers on the streets of Jacksonville. She pointed out that Curry’s administration found funding for the Hart Bridge ramp removal, The Landing settlement, as well as entertainment and sports-related funding, while funds allocated to children’s programs and services remained the same.

Curry repeatedly emphasized the establishment of the Kids Hope Alliance, saying, “Many people label these kids at-risk. I call them at-hope.” But Brosche insisted that funding for children’s programming had not increased over the last decade.

“You can rebrand and offer the same services, but the funding hasn’t changed,” Brosche said.

The Landing was a hot-button topic and candidates used a number of colorful monikers–the home plate of downtown, the gem, the crown jewel, and the heart of the city– all referencing the property at the center of a recent $15 million settlement.

Amid the mention of board stacking and clearing, a bankruptcy, a failed run for mayor, alleged Sunshine Law violations, and a culture of fear, the sale of JEA drew catcalls from the crowd as the candidates pressed Curry on the controversial issue. When asked whether they were for or against the sale of the publicly-owned utility, Hill and Brosche stood firmly against the sale but all agreed voters should have a choice in the matter. Remarks by Allen and Curry left those listening to wonder how they would proceed if elected.

Each candidate utilized a final 60 seconds of airtime for concluding remarks. “You solved the pension problem. Together we solved it. We’ve been through two storms together,” Curry said as he listed the many hallmarks of his tenure.

Brosche, also a Republican, ended by saying, “We must return the power to the people, not the party.”

“With all that’s happening in our community and the importance of hearing how each candidate plans to tackle the important issues, we felt it was the right thing to do to expand our reach.”

March 19, 2019, is election day and early voting sites across Jacksonville are already open. If no candidate receives a majority of votes in the general election, a runoff is scheduled for May 14.

Partnering with News4Jax (WJXT), JU presented an event unlike previous debates. All television stations in the Northeast Florida market were invited to participate in the station-neutral broadcast. WJCT carried the debate on television and radio channels, and First Coast News (WTLV) carried the event on its digital channel and website.

News4Jax Anchor and political journalist Kent Justice moderated. He called the relationship between the University and News4Jax “a partnership for the benefit of the public.”

Also in the audience were Sheriff Mike Williams, former and present Councilmembers, appointed city officials, fans and supporters of each candidate, and members of the media, as well as Jacksonville University staff, alumni, supporters, and University President Tim Cost.

“We were pleased and proud all qualified candidates accepted the invitation, said Bob Ellis, vice president and general manager of WJXT. “With all that’s happening in our community and the importance of hearing how each candidate plans to tackle the important issues, we felt it was the right thing to do to expand our reach. We’re very pleased WJCT and First Coast News have accepted our invitation.”

The Jacksonville University Public Policy Institute offers a Master in Public Policy (MPP) degree and dual degree programs for policy and marine science (MPP-MMS), policy and business (MPP-MBA), and policy and law (MPP-JD). The Institute seeks to shape the future through preparing a new generation of leaders and public policy experts, and by providing a neutral gathering place for public policy discussion, education, and debate.
Hosting debates, forums, and town hall meetings where local voters can gain direct access to policymakers, influencers, and candidates is a critical part of what the Institute does.

For more information about upcoming events or the Institute and its degree programs, visit https://www.ju.edu/publicpolicy, or email inquiries to ppi@ju.edu.