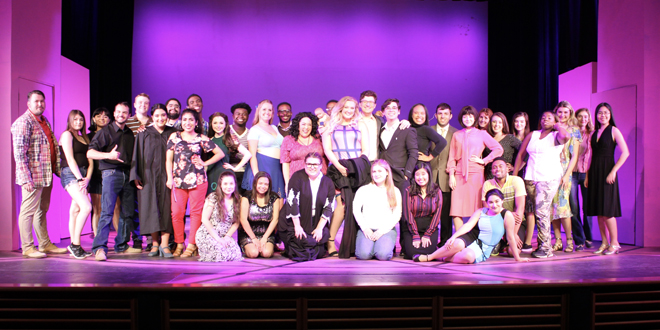 Women’s History Month is coming to a close as the Linda Berry Stein College of Fine Arts opens its production of the acclaimed Broadway hit, “Legally Blonde: The Musical.” The Tony Award-nominated show takes the JU stage in Swisher Theatre Mar. 28 to 31.

It’s women’s history month right now and it feels great to be able to tell this story. We live in a time where women are finally being taken more seriously.

The show follows the story of UCLA Delta Nu Sorority sister Elle Woods, played by Theatre Arts major Sarah Stepp, as she tackles Harvard Law School to prove that she can be “serious.” A large cast and crew of JU students are featured, all under the direction of Theatre Department Artist-in-Residence Erik DeCicco and with music direction from Assistant Professor of Voice Jay Ivey.

“Erik has a vision for things and knows exactly what he wants and he doesn’t accept anything less than perfection,” Stepp said. “He’s the type of person who wants to just get up and do it, and not think about it too much. If it doesn’t work, we can change it after. The whole experience has been extremely disciplining and rewarding.”

The musical focuses on the ups and downs of Elle’s experience navigating law school, at first to win back her boyfriend. She soon realizes that she’s motivated by all the wrong reasons and begins a personal growth championed by her hairdresser and friend Paulette, played by Aaron DeCicco. Delta Nu sisters Margot, Serena, and Pilar are played by Kelly Wolfe, Kyrstin Creswell, and Isabella Martinez, all familiar faces on the JU mainstage.

“This show is coming at a really special time. It’s women’s history month right now and it feels great to be able to tell this story. We live in a time where women are finally being taken more seriously,” Stepp said. “This show contributes to that as a predominantly female cast, which I think is amazing. It gives women greater opportunity to shine on stage and it speaks to how powerful women are and deserve to be taken seriously. In whatever we choose to do.”

I learned that choosing kindness, no matter the circumstances, has the biggest personal reward.

The experience has inspired personal lessons, too, especially for Stepp, who describes Elle as the biggest role she’s had the opportunity to play. “This role really pushed my boundaries and allowed me to discover my limits as a performer, which has been so exciting,” she said. “The biggest thing this character taught me is how to take the higher road. In this show, she has to fight hard to make a name for herself despite constant adversity. I learned that choosing kindness, no matter the circumstances, has the biggest personal reward.”