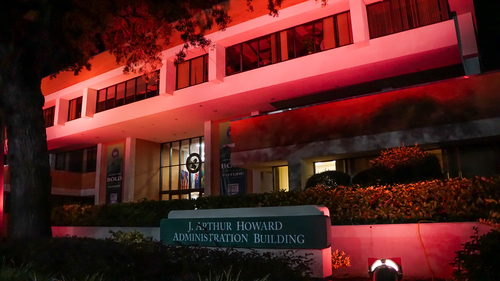 If you cruise by JU’s campus one crisp, October evening after sunset, you’ll notice a pink hue coming from some of the buildings that face University Boulevard.

This October, Jacksonville University teamed up with a nonprofit organization to light three buildings on campus—the Frisch Welcome Center, the Howard Administration Building, and the Rock Lacrosse Center. Each is drenched with pink lights in honor of Breast Cancer Awareness Month, an annual event founded in 1985 by the American Cancer Society and the Imperial Chemical Industries Pharmaceuticals Company.

The goal of this month-long event is to raise awareness of the cancer that affects roughly one in eight women. Additionally, one in 150 trans women taking estrogen battle breast cancer, as do one in 800 men.

JU’s partner in painting the campus pink is a local, all-volunteer nonprofit called Pink Ribbon Jax. Since its founding in 2006, the organization has raised more than $2.1 million for breast cancer research, mammograms, and patient services at Baptist Health and Mayo Clinic in Jacksonville.

This year, in addition to lighting the three JU buildings pink, the organization will be lighting various locations around Jacksonville, including the Acosta Bridge, the Jacksonville Jumbo Shrimp 121 Financial Ballpark, Mayo Clinic, and Wolfson Children’s Hospital.

Pink Ribbon Jax’s decision to light up the Mayo Clinic inspired other Mayo Clinics across the country to do the same, all in the name of spreading awareness about breast cancer. According to Pink Ribbon Jax’s Chair, Marica Pendjer, the “de-light-ful” initiative has a specific reason: “Lighting Jacksonville pink will provide a visual testament of support to thousands of families battling this disease who felt isolated during COVID. Through lighting, collectively we are saying, ‘you are not alone. The Jacksonville community is behind you, even when you can’t see us.’”

On why Pendjer chose to partner with JU, she says, “Jacksonville University and Pink Ribbon Jax share the same philosophy—we both believe in the importance of community engagement and promoting quality of life.”

Pendjer wants to encourage JU’s young students to think about their own breast health and to remind their loved ones to take care of themselves. “Breast cancer is 98% treatable, which means survivable,” says Pendjer, “The earlier breast cancer is diagnosed, the more treatment options are available and the more favorable the results.”

Last year, Pink Ribbon Jax raised $250,000, of which 98 percent went directly to the fight against breast cancer. The donations from 2020 supported the purchase of a Baptist’s 3D-Mobile Mammography “Buddy Bus” for Baptist Heath that will be arriving in January. These donations also helped fund Mayo Clinic’s breast cancer vaccine, which is in its final stages of development.

Pink Ribbon Jax’s goal for 2021 is to fund 1,500 mammograms for uninsured and underinsured people. Each free mammogram would cost around $300, and this year’s target is to raise $450,000. To donate, or for breast cancer support resources, visit www.pinkribbonjax.org.