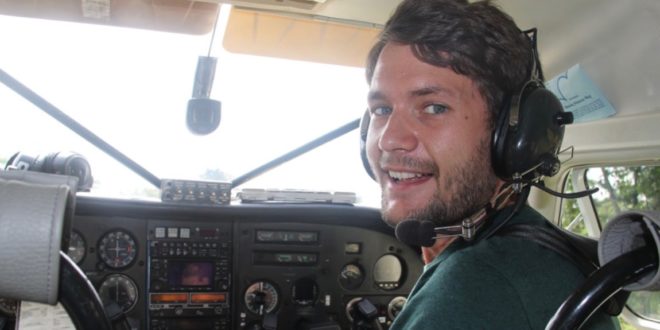 Lucas Meers has been fascinated by nature since birth. Growing up with a forest in his backyard, Meers recalls constantly being outside catching frogs or lizards, tree climbing, and playing in the creek.

“I remember saving peanut butter jars and running around with nets trying to catch anything that moved,” he said. “My school had seasonal ponds that I would catch tadpoles in, take them home to watch them grow into frogs and toads, and then release them.”

From Wildlife to Greek Life

His high school didn’t offer AP biology, so once he took all the biological science classes he could, he convinced his guidance counselor to let him take the AP Biology exam. He credits his preparedness for Jacksonville University (JU) to his score on that exam. “I chose JU because it was close to the beach,” he said. “Coming from the Midwest, Northeast Florida was so exotic. A magical place full of plants and animals I couldn’t wait to explore.”

Once Meers got to JU, he became involved in Student Life and Greek Life. “I’m a people-person and generate energy from being around groups of people and sharing knowledge,” he said. “I really enjoyed my involvement in activities, and looking back now, the skills I gained in those clubs and organizations set me up for success in life after college.”

“There isn’t just one memory from JU that is my ‘favorite’ simply because there are so many memories I wouldn’t trade for anything. My overall JU experience provided an opportunity to break out of my shell, be myself, cultivate friendships, and find opportunities. I loved it so much, I extended my time there by two years,” Meers said.

After graduating from JU, Meers began coordinating the conservation funding for the Jacksonville Zoo. His job also allowed him the opportunity to coordinate the zoo’s involvement in conservation work by getting them in the field and developing their understanding of current issues dealing with conservation.

Half of his efforts supporting the Zoo are dedicated to the Okapi Conservation Project, which focuses on the Democratic Republic of Congo (DRC) and the protection of the endangered Okapi and its habitat. Through this program, they assist surrounding communities with sustainable living and education. Protecting the rainforests not only impacts the survival  of wildlife but communities as well.

We essentially assign a dollar value to an animal or plant. What we need to learn is how to ‘re-love’ nature

“My job is fantastically blended to allow me to see wildlife conservation from multiple angles,” he said. “I am in regular communication with the ‘celebrities’ of the conservation world and constantly inspired and motivated by what they do. Networking with people that are truly changing the world is an experience that I will always cherish.”

After beginning his conversation efforts at the Jacksonville Zoo, Meers  accepted an exciting opportunity as a research assistant with the Sea Turtle Conservancy. “I’ve worked with sea turtles in north Florida since 2011, by collecting nesting data for FWC. Having the chance to work in a remote location with adult female turtles was life-changing.”

Through his conservation efforts, Meers has been able to make traveling a priority so he can experience new cultures and meet interesting people. One of his most memorable travel experiences was spending a night in the rainforest of the DRC among the Mbuti Pygmies. The Mbuti people are nomadic net hunters who have cohabitated with the ecosystems of the Ituri rainforest for over 40,000 years. The population plays an integral role in the biological and cultural diversity of the region.

Upon arrival, armed rangers escorted Meers to the Mbuti village on a four-hour bushwhacking hike. There, he participated in a hunt for mushrooms as well as a small deer-like animal called a duiker. After the hunt, Meers experienced home-life in the village. “The children would play games before dinner and dogs ran around chasing chickens,” he said. “Each family had their own leaf hut. Roughly a dozen huts to divide between 75 people.”

The most interesting part of the trip, Meers said, was maneuvering a dual language barrier. He speaks broken French, the official language of the DRC, but the Mbuti people speak their own native dialect. If he needed to communicate, the rangers would translate his French into the Mbuti language, but much of their communication was nonverbal. “It is amazing how much you can communicate without the use of words,” he said.

Now Meers realizes just how much JU has prepared him for the unexpected. One of his most valued takeaways, Meers said, is the diverse community of people at JU. Diverse races, beliefs, backgrounds, orientations, and genders. “Having a career working with people from incredibly diverse backgrounds and experiences from around the world, it is necessary to communicate and learn from those differences,” he says.

At the core of Meers’ love for nature is a deep-seated passion to preserve nature for future generations. So others have the opportunity to appreciate it as he does. Conserving our ecosystems, he said, means a healthier planet for everyone–plants, animals, and humans alike. Meers places utmost importance on appreciating the intrinsic biological and cultural value of the world around us. “So often when legislation needs to be passed to protect a species, or when there is a human-wildlife conflict that needs to be addressed, we only think of the environment in terms of dollars because that’s what resonates with most people,” he says. “We essentially assign a dollar value to an animal or plant. What we need to learn is how to ‘re-love’ nature and expose ourselves to a real appreciation of what it is and what it has to offer.”