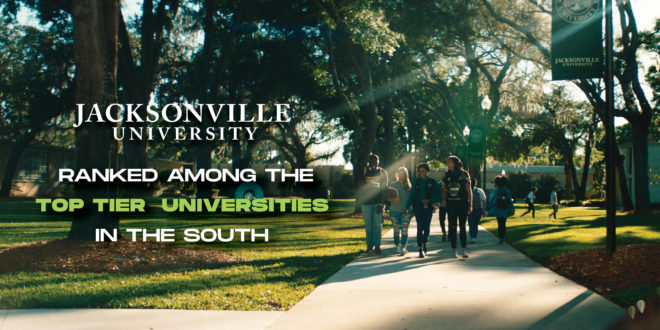 Jacksonville University also improved its positions in the Best Colleges for Veterans and Best Value Schools rankings demonstrating how the university’s focus on the future is paying present dividends.

“We believe in innovation that leads to growth, not status quo,” says University President Tim Cost ‘81. “These recognitions are evidence of a culture where students get the individualized attention they need, while being challenged to stretch themselves in pursuit of excellence.”

JU also made the list of Best Nursing Schools for its Doctor of Nursing Practice and Master of Nursing programs, and the JU Speech-Language Pathology program was recognized among the best in the region.

In recent years, the University has launched initiatives to improve the student experience and expand educational opportunities, which the rankings reflect. These initiatives include:

U.S. News & World Report has published its college rankings for 35 years. This year, the outlet looked at 1,400 colleges and universities focusing on academic quality and measures including graduation rates, retention rates and social mobility.

U.S. News & World Report has ranked Jacksonville University among the top regional colleges or universities in the South each year since 2004.