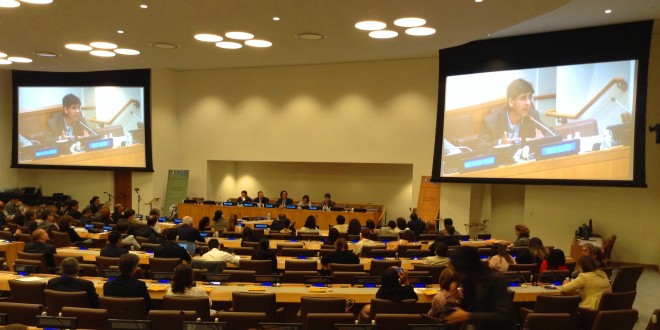 JU Assistant Professor of Spanish Jorge Majfud is seen on screen as he pays tribute to Eduardo Galeano at the United Nations.

Majfud was invited along with other noted Latin American authors and dignitaries to honor Galeano, a leading voice of the left best known for his 1971 bestseller “Open Veins of Latin America.”

The Permanent Mission of Uruguay at the United Nations requested that Majfud, who has been hailed as one of the Top 10 current Latin American writers, speak May 26 during a panel discussion of Galeano and his work.

Majfud discussed modern utopias and their relationship to Amerindian cosmology. For his book “El eterno retorno de Quetzalcoatl,” Majfud did research on pre-Columbian mythology, repression of native culture by the Spanish conquest and the culture’s resurfacing in the 20th Century with help from intellectuals such as Galeano.

The event was organized by the Embassy of Guatemala; most Latin American ambassadors, and representatives were present and participated in a question-and-answer section.