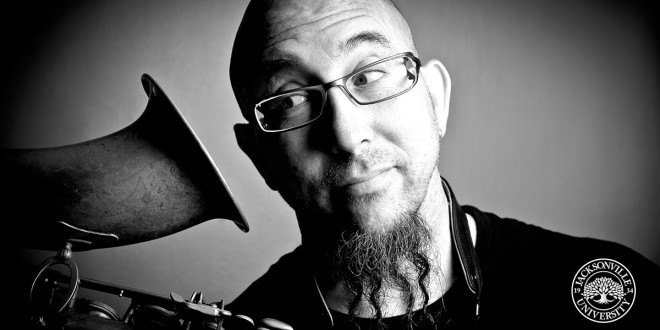 The Jacksonville University College of Fine Arts presents Jeff Coffin & the Mu’tet, playing Terry Concert Hall Feb. 26 at 7:30 p.m. Admission is free for ALL students, just bring your college or high school ID. Tickets are $25 and are available here.

The Mu’tet is led by Jeff Coffin, saxophonist from Dave Matthews Band. Also a composer, educator, and three-time Grammy winner, you likely know Jeff from his 14-year tenure with the genre-defying Bela Fleck & the Flecktones (1997-2010). The Mu’tet takes its name from the word ‘mutation,’ clearly reflecting Coffin’s philosophy that music must continue to change and mutate in order to grow. JC & the Mu’tet strive to expand themselves, as well as their fans, with music flavored by their wide musical interests. Blending music from the deep wells of funk, African, New Orleans, Indian, jazz, folk, Gypsy, rock, Brazilian and other cultures of music, this band is unlike any you will hear.

Scheduled to coincide with this event are two open clinics. First, on Feb. 25, there will be a 3 p.m. clinic with the JU Jazz Combos in Phillips Fine Arts room P-19. Then on Feb. 26, following the JU music program’s open house auditions, Jeff Coffin will give an open master class at noon in Terry Concert Hall.

This event is not only a celebration of great modern jazz artists, it is also an official inauguration of the college’s new Bachelors of Music degree with a Concentration in Jazz and Commercial Music. Coffin’s involvement for this weekend will resonate with a new approach to a rigorous musical study that is integrated with music business, production and commercial arranging.