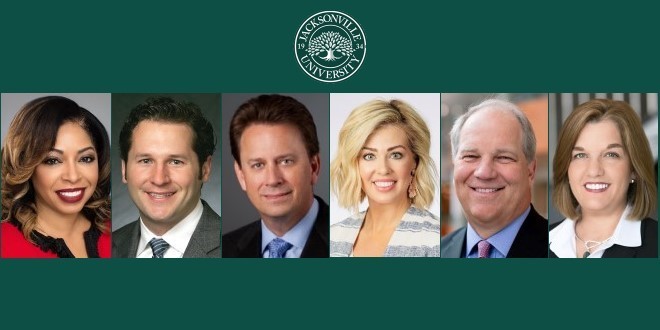 Jacksonville University Welcomes New Members to Board of Trustees

This October, Jacksonville University is adding six civic and business leaders to its Board of Trustees.

The new and returning members include:

“Since early 2013, we have been focused and dedicated to building a much better university for our students and our surrounding community,” said Jacksonville University President Tim Cost ’81. “That progress has enabled us to be thoughtful in crafting and attracting the right mix of experience and breadth of knowledge to create one of the top advisory groups in the entire region. We are very proud to raise the bar by adding these outstanding industry leaders to the Board.”

These Trustees bring vast expertise and strong ties to the Northeast Florida community, which will further strengthen an already stellar Board of Trustees that continues to propel JU towards a bright future.

The new cohort of Trustees includes the following individuals:

Jannet Walker Ford is the Vice President of Government Relations at Cubic Corporation. With more than two decades of leadership experience in the transportation industry, she advocates for bipartisan political support for major infrastructure investment in the U.S. This year, Walker Ford was recognized as one of the “Women Who Move the Nation” by the Conference of Minority Transportation Officials (COMTO), one of Miami’s Women Who Rock, and one of the 2019 Transportation Diversity Council (TDC)–Massachusetts Institute of Technology (MIT) award recipients for her service to the transportation community. She currently serves on the American Public Transportation Association (APTA) Board of Directors, APTA Foundation Board, Eno Transportation Advisory Board, Women’s Transportation Seminar (WTS) International and its scholarship organization, the WTS Foundation. She also serves as Vice Chair for the Cultural Council of Greater Jacksonville. Through her work and philanthropy, Walker Ford strives to inspire women and minority professionals to pursue roles in STEM and transportation-related fields.

Matt Kane ‘01 is the founder of Greenshades Software, where he currently serves as a board member. He is returning to the Board of Trustees after serving from 2009-2018. Kane also serves as vice chairman on the Northeast Florida Regional STEM2 Hub and as an executive board member for the Jacksonville Civic Council. His previous civic commitments include chairman for the Jacksonville Children’s Commission, board member for Teach for America in Jacksonville and the Jax Chamber, and a member of the Jacksonville Mayor’s Port Task Force. Kane received his bachelor’s degree in Computer Information Systems from JU and an MBA from the University of Florida. He is currently pursuing his second master’s degree in Information and Data Science from the University of California, Berkeley. He is a past chair of the JU Alumni Board of Governors, serving from 2005-2010. His wife, Alexis Conciatori Kane, a JU CRNA 2002 graduate, is a nurse anesthetist, yoga instructor, and serves on the advisory board of JU’s Brooks Rehabilitation College of Healthcare Sciences. Kane’s sister, Laura, is JU’s head women’s soccer coach. Both Kane and his wife are deeply invested in JU as Shircliff Circle members, as well as lead ASPIRE investors.

John J. Miller is president of Swisher International. He joined the company in 2012 as its senior vice president of sales and marketing after working in the tobacco and consumer packaged goods industries for more than 25 years. Miller’s previously served as regional vice president for the U.S. Smokeless Tobacco Company, interim president of Goldwater’s Foods of Scottsdale, and a principal in two consulting firms. He received his bachelor’s degree from the University of Nevada-Las Vegas and an MBA from Pepperdine University.

Audrey Moran ‘10 is a Personal Insurance Division account director for Harden, one of the Southeast’s leading insurance, risk management, and employee benefits firms. She is an active member of the Riverside Rotary Club and serves on the committee for the Glyn Cook Memorial Scholarship for Daniel Kids. She has also served the Angels for Allison Artist Series, the 2017 “Fries With That Wine” event hosted by the Red Shoe Crew of Jacksonville and Ronald McDonald House Charities of Jacksonville, and the 2017 American Cancer Society’s Cowford Ball. Moran, a JU legacy graduate, earned her bachelor’s degree in Business Management where she joined Alpha Delta Pi and was the founding vice president of the JU Sporting Clays, Skeet and Trap Team. After graduation, she served on the Alumni Board of Governors from 2013-2015 and became a founding member of the JU GOLD (Graduates of the Last Decade) Phin Society where she continues to serve as a committee member. Moran’s father, Andrew Francis Moran, served on the JU Board of Trustees from 2006-2015.

Nina Zuccaro Waters ’80 is president of The Community Foundation for Northeast Florida, Florida’s oldest and largest community foundation. She is an expert on philanthropy and the nonprofit landscape in the region. Prior to joining the Foundation in 2001, she served as executive director of the PACE Center for Girls Jacksonville program for 12 years. Waters is the 2010 recipient of the JU Distinguished Alumni Award, the 2013 Florida Times-Union EVE Award honoree for employment, the 2014 President’s Citation from OneJax Institute, and the Girl Scouts’ Women of Distinction Award in 2008. She was inducted into the First Coast Business Hall of Fame in 2014. She currently serves on the Jacksonville Juvenile Justice Advisory Board, Jacksonville Civic Council, and the Women’s Giving Alliance Steering Committee. Waters is a previous JU Trustee, serving from 2007-2009, and earned her bachelor’s degree in Sociology from JU.

The JU Board of Trustees has 28 members, including 11 alumni. Trustees represent national leaders in fields such as education, technology, health care, financial services, medicine, and the law. Among its duties, the Board is responsible for reviewing academic programs, fundraising, and working with President Cost and top administrators to approve major policies, make long-term plans, and oversee the strategic direction of the university.