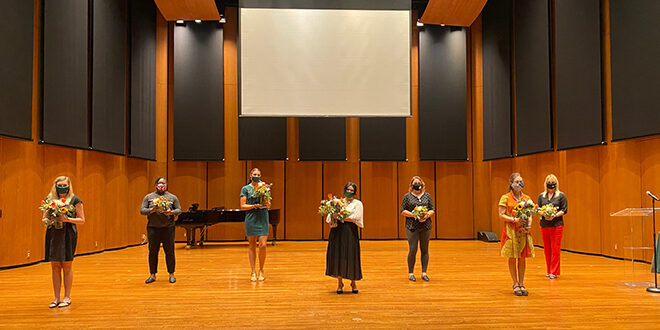 Jacksonville University has announced its 2020 and 2021 Woman of the Year Award recipients. The winners for both years were announced during a live-streamed ceremony punctuated with performances provided by the university’s own Linda Berry Stein College of Fine Arts.

Throughout the month of March, Jacksonville University has joined the rest of the nation in celebrating Women’s History Month. Meaningful discussions, women’s athletics, and an “admiration station” where notes of appreciation and support could be written have all been incorporated into a schedule of events that culminated with the Woman of the Year honors.

This esteemed occasion is typically held in person. It was cancelled last year and moved to a virtual format this year because of the pandemic. Attendance was limited to the winners and their invited guests, and while audience members live-streamed the ceremony, awards were presented in the student, graduate student, faculty member and staff member categories.

The Frances Bartlett Kinne Woman of the Year Award for the student category was particularly meaningful this year. Dr. Kinne, the university’s beloved former president and chancellor emerita, passed away in May of 2020. She dedicated 62 years of service to Jacksonville University and the greater Jacksonville community. Known for her many accomplishments, unquenchable optimism and selfless service to others, Kinne embodied the true spirit of the university’s woman of the year honors. Her namesake award is endowed with a $500 scholarship for the recipient.

All of the Woman of the Year winners were selected through a nomination process, and all emulate the attributes associated with this honor. These include leadership, academic success, campus engagement and community involvement. It is with tremendous gratitude and pride that Jacksonville University presents the following Woman of the Year Award recipients.

Jeilymar Morales accepted the 2021 Frances Bartlett Kinne Student Woman of the Year Award. Morales is a fine arts major who performs on campus and also recently made it to the semi-finals of a major theater competition in this region. She serves as the attorney general for the Student Government Association and has been described as a young woman who wants to empower and uplift other women. As stated in her nomination, “she’s got spunk and a desire to do amazing things with her time at JU and beyond.”

Graduate Student Woman of the Year
Jenna Blyler accepted the 2020 Graduate Student Woman of the Year Award. Blyler is pursuing a master’s degree in public policy, was a resident advisor and currently works in the Office of the Provost and the Office of Marketing and Communications. According to her nomination, she is a “self-disciplined, hard worker who always goes above and beyond to assist others.” Blyler has been described as professional, efficient, knowledgeable and diligent about promoting the great work that is done on campus.

Shannon Perkins accepted the 2021 Graduate Student Woman of the Year Award. Perkins will soon be a “double Dolphin” and is pursuing her MBA with a concentration in finance, accounting, marketing and consumer goods. Perkins works in the Office Residential Life where she leads a team of 19 resident advisors and one graduate assistant while navigating graduate school herself. According to her nomination, she is a positive leader, who cares deeply about students.

Faculty Woman of the Year
Shelley Grant accepted the 2020 Faculty Woman of the Year Award. Grant is an assistant professor of sociology, and according to her nomination, her impact on campus is immense. Her contribution to the entire campus community is felt, not only in her unmatched dedication to students, but also in her completely selfless service to the advancement of the entire university and surrounding community.

Dr. Nisse Goldberg accepted the 2021 Faculty Woman of the Year Award. Goldberg is a professor of biology and marine science. Her areas of specialization include terrestrial and marine botany and ecology. She is the faculty advisor to the Beta Beta Beta National Biological Honor Society and the Red Cross club. She is a graduate thesis advisor who, according to her nomination, always makes time for her students, while also donating her time to her volunteer work.

Staff Woman of the Year
Jamie Burket accepted the 2020 Staff Woman of the Year Award. As Jacksonville University’s assistant dean of students, Burket works tirelessly to improve the student experience. She has been described as thoughtful, fair and vigorously committed to getting the job done while remaining truly considerate. In her current role, Burket uses evidence-based best practices to help shape the co-curricular experience at JU. This year, she served as a COVID-19 coordinator and partnered with the Student Health Center to help keep the campus community safe and healthy.  Assuming this leadership role during the pandemic allowed her excellence to shine. According to her nomination, she is “an unsung hero making positive strides and changes at Jacksonville University.”

Katie Jackson Webber accepted the 2021 Staff Woman of the Year Award. Jackson Webber is Jacksonville University’s director of creative and digital marketing. She created and runs the student worker program within the Office of Marketing and Communications. She is also pursuing her second master’s degree as a graduate student of the Linda Berry Stein College of Fine Arts. Katie has been described as a positive manager and role-model, a talented designer, a detail-oriented project manager and an extremely reliable teammate. According to her nominations, Katie displayed perseverance and a commitment to excellence in the face of overwhelming obstacles due to COVID-19.