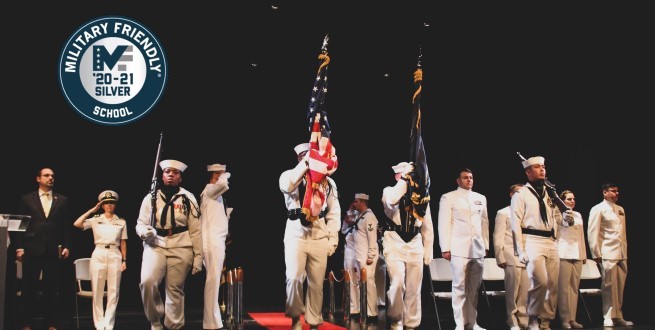 This year, Military Friendly named Jacksonville University a “Silver” school in its category, which is a private school offering doctorate degrees. That means the University’s scores fell within 20 percent of the 10th ranked school in the category.

Methodology, criteria, and weightings were determined with input from the Military Friendly Advisory Council of independent leaders in the higher education and military recruitment community.

Final ratings were determined by combining the institution’s survey scores with the assessment of the institution’s ability to meet thresholds for student retention, graduation, job placement, loan repayment, persistence (degree advancement or transfer) and loan default rates for all students and, specifically, for student veterans. The benchmark is set by the score of the leading institution in each category.

Military Friendly recognizes only those colleges with the most outstanding programs for veterans and spouses, specifically by pinpointing resources that ensure not only success in the classroom, but in translating military competencies into training and positive employment after graduation.

In addition, JU provides the Veterans and Military Resource Center to assist its veterans with admission, transition, academic success, and student involvement.

More than $5 million in VA benefits are paid annually to student veterans, and the University is a 100 percent Yellow Ribbon Match school. Our more than 40-year-old Naval NROTC Unit was the first chartered in Florida and has commissioned more than 1,500 Navy Ensigns and Marine Corps Second Lieutenants.