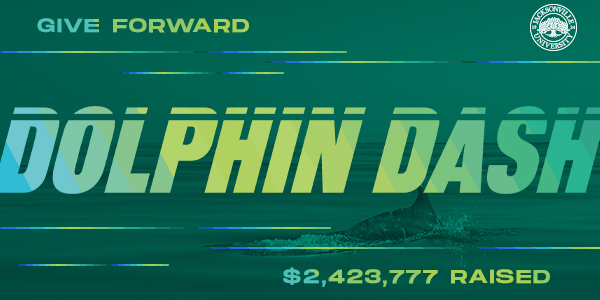 Jacksonville University is celebrating the success of Dolphin Dash, its annual giving challenge. Last week, in just five days, from Feb. 22 to Feb. 26, 6,397 Dolphins from around the world came together to Give Forward and invest more than $2,400,000 in the areas of campus they care about most.

The rest of the year is about giving back; Dolphin Dash is about powering forward, donors challenging donors to invest in Jacksonville University. In 2019, 2,879 loyal alumni, students, families, faculty and fans of Jacksonville University put Phins first, raising $674,250 for the university during the Day of Giving. This year, those totals were smashed in record-setting fashion.

What started as a race to hit 3,000 donors quickly turned into an opportunity to let passion power progress as Dolphin Dash surpassed this goal after just 48 hours. By day three, the campaign had raised over $1,000,000, and the Dolphin family continued to charge ahead.

By Friday afternoon, the campaign was just shy of hitting $2,000,000 when Jacksonville University President Tim Cost and wife, Stephanie Cost, supported every challenge, team and student organization competing in Dolphin Dash with a gift of more than $100,000. Their generous investment brought the university over the $2,000,000 mark and included support for JU’s Greatest Needs Fund, the Fran Kinne Memorial Fund, and the Tim and Stephanie Cost Scholarship.

The Costs were joined by many other scholarship donors who provided additional funds to their named scholarships during Dolphin Dash, including Davide Foschi and Laura Angelini, The Michael Ward and Jennifer Glock Foundation, Bob and Monica Jacoby, Matt and Alexis Kane, Steve and Blanche Koegler, George and DiAnne Scanlon, Jamie and Ali Shelton, Linda and David Stein, and Chuck and Cami Wodehouse.

Nearly 100 alumni stepped up to serve as Dolphin Dash Champions, tapping into their networks to raise support for one of the six Challenges: Athletics, Black Alumni Network, College, Greek, GOLD Phin, or Parents & Families.

Athletics Challenge
3,924 student athletes, alumni, parents, and Dolphin fans supported the Athletics Challenge. Men’s Lacrosse took home the $3,500 prize for most dollars raised, while the Spirit Squad ended the week with the most donors, garnering 1,060 supporters. With the $3,500 prize they unlocked, the Spirit Squad will be heading to Nationals.

The head coach of every Jacksonville Athletics team made a gift to support their student athletes.

GOLD Phin Challenge
With nearly 200 total supporters during the campaign, the GOLD Phin Network exceeded their goal of 100 GOLD Phin donors on the final day of the campaign to unlock prizes for all alumni donors. Congratulations to Darion Diasgranados ’11 from Dallas, TX for winning the drawing for the iPad Mini!

Greek Challenge
Greek Chapters faced off in a tight race for both most donors and most dollars raised throughout the week. On the final day, Alpha Delta Pi overtook Tri Delta to take home BOTH prizes, for a total of $5,000. Alpha Delta Pi, Alpha Epsilon Phi, Alpha Kappa Alpha, Delta Delta Delta, Gamma Phi Beta, Sigma Chi and Sigma Nu all reached their alumni benchmark goal of 25 alumni donors to unlock $1,000 each.

Parents & Families Challenge
The Class of 2024, along with their families and friends, raised the most funds during the five-day campaign. Our freshman class will have the opportunity to attend a drive-in movie event to unwind before the semester is over.

The 27 members of Jacksonville University’s Board of Trustees participated in Dolphin Dash at a record rate, contributing an incredible $600,000 for our students during the campaign.

Alumni also participated in the campaign at record rates. More than 650 graduates made a gift, helping Jacksonville attain its highest alumni participation in over a decade. Alumni support not only makes an immediate impact on campus but helps the university climb the U.S. News and World Report rankings.